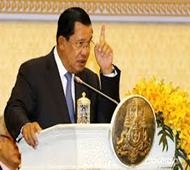 Phnom Penh: A Cambodian court on Friday sentenced three members of Prime Minister Hun Sen’s personal bodyguard unit to four years in prison, over their role in the mob attack of two opposition lawmakers in October 2015.

Mao Hoeung, 34, Sot Vanny, 45, and Chhay Sarith, 33, had all confessed to their role in the October 26, 2015, attack which saw two lawmakers from the Cambodia National Rescue Party (CNRP) dragged from their cars, beaten, kicked and stomped on as they left the National Assembly in Phnom Penh during an anti-CNRP protest, EFE news reported.

The three men were escorted into the Phnom Penh Municipal Court, and a verdict was handed down within three hours.

“The court decides to sentence Chhay Sarith, Mao Hoeung and Sot Vanny each to four years in jail but they only have to serve one year in jail, the additional three years is suspended,” Judge Heng Sokna said.

The verdict comes a day after Human Rights Watch (HRW) released a report calling for a “full and independent investigation” into the attack.