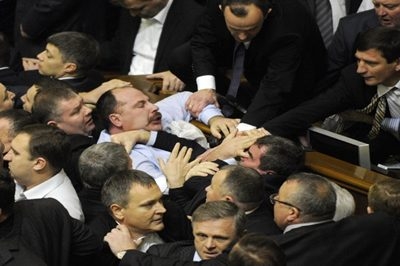 Ukrainian lawmakers fight around the rostrum during the first session of Ukraine's newly elected parliament in Kiev, Ukraine, Thursday, Dec. 13, 2012. Ukraines newly elected parliament has chosen a pro-government speaker amid violent brawls between pro-presidential and opposition lawmakers. On Thursday, opposition lawmakers swarmed the parliaments presidium and a fight erupted with pro-government legislators. The opposition demanded that their opponents stop voting in place of their absent colleagues. (AP Photo/Sergei Chuzavkov) |

Kiev: A fight erupted between dozens of lawmakers in Ukraine’s parliament today after an MP picked up Prime Minister Arseniy Yatsenyuk and hoisted him away from the podium as he was defending his embattled government’s record.

Yatsenyuk had almost ended up his weekly questions session when a lawmaker from President Petro Poroshenko’s faction, Oleg Barna, came up to him and handed him a bunch of red roses, an AFP correspondent reported from the scene.

Barna – a fierce opponent of Yatsenyuk who has campaigned for him to resign – then grabbed Yatsenyuk by the waist from behind and forced him out of the rostrum.

The tall but slight prime minister managed to grip the outside of the rostrum and held on, still gripping the bouquet, as the moustachioed lawmaker then grabbed him by the
crotch and tried to prise him away. This prompted dozens of male MPs to rush to intervene and they began scuffling and trading blows.

Nobody was reportedly injured in the brief fight between lawmakers of pro-Poroshenko’s faction and Yatsenyuk supporters.  Such brawls are not rare in Ukraine’s 450-seat unicameral parliament, highlighting the fragile nature of Ukraine’s pro-Western coalition made up of Poroshenko’s and Yatsenyuk’s factions and two smaller groups.

“Parliament is not a circus and it is not a show,”Yatsenyuk said once the fight had ended, calling on lawmakers to behave more responsibly. “This is shameful for our country,” added Viktoria Syumar, a lawmaker from  Yatsenyuk’s Narodny Front faction. The leader of Poroshenko parliamentary bloc, Yuriy Lutsenko, immediately apologised for the incident, promising that his colleague Barna would be “reprimanded” for this “unacceptable act”.

The year-old pro-Western parliamentary coalition is struggling to overcome internal splits as it struggles with the economic crisis and the deadly conflict with pro-Russian
rebels in the eastern Ukraine that has already claimed more than 9,000 lives.