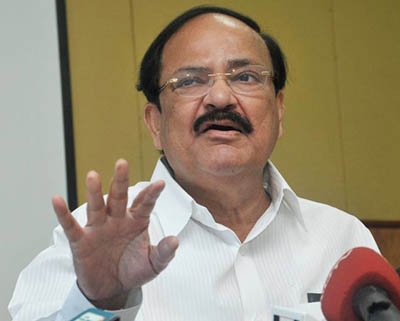 New Delhi: Amid the brewing controversy over ‘Bharat Mata Ki Jai’ slogan, Union Parliamentary Affairs Minister M. Venkaiah Naidu on Monday asserted the slogan has no religious connotation and added that it was just a way to salute the motherland.

“Bharat Mata Ki Jai has no religious connotation. It is salutation to the people. I want to make it very clear it is not simply saying the slogan. When you say ‘Jai Ho Bharat’ then people living in India should all be encouraged, they should all be given the needed support and their interests have to be taken care. By saying ‘Bharat Mata Ki Jai’, we reiterate our commitment to the fellow citizens of the country,” he added.

AIMIM leader Asaduddin Owaisi had stirred a hornet’s nest by rejecting RSS chief Mohan Bhagwat’s suggestion that the young generation be taught patriotic slogans like ‘Bharat Mata ki Jai’ stating that he won’t chant the slogan “even if a knife is put to his throat”.

“I don’t chant that slogan. What are you going to do Bhagwat sahab?” Owaisi said at a public rally in Latur.

Leaders of various political parties, including the BJP and Congress, have condemned Owaisi’s stance.

Prime Minister Narendra Modi was greeted with chants of ‘Bharat Mata Ki Jai’ slogans as soon as he climbed the stage by people sitting in the audience when he went to deliver the inaugural lecture at the World Sufi Forum on March 17.