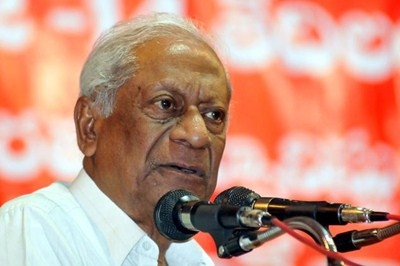 New Delhi: The condition of CPI leader A B Bardhan, who was admitted to a hospital here after he suffered a paralytic stroke, is “improving” though he remains “critical”, a senior party leader said today. 92-year-old Bardhan, who was admitted to GB Pant Hospital yesterday after he complained of uneasiness and breathlessness, responded to injections, could open his eyes and had movement in his left leg, Atul Anjan said after visiting the former CPI General Secretary.

“He is under observation in ICU. The breathing support system is helping him. Doctors attending on him have said 72 hours are critical. It is good ….drug administered to him have little bit of effect and he is showing improvement.

“Yesterday, he was not responding much to treatment.But now, in the morning when he was given injection, he could open his eyes, his left leg also showed some movement. His will power is helping him recover,” Anjan stated. Politicians including NCP chief Sharad Pawar, CPI(M) parliamentarian Mohammed Salim and party politburo member Brinda Karat, trade unionists and Left cadre activists were amongst those who visited the hospital to enquire about Bardhan’s health.

“UP Chief Minister Akhilesh Yadav also spoke to me over phone to enquire about his health. Yadav offered all help,” Anjan said.