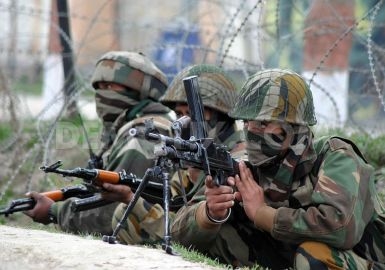 Srinagar: A commanding officer, who had only yesterday won a military medal, was today killed along with a policeman while battling a group of Hizbul Mujahideen terrorists in Jammu and Kashmir’s Pulwama district.

Colonel M M Rai, commanding officer of 42 Rashtriya Rifles (RR), and a policeman were killed in the gun battle at Mindora village of Tral, 36 km from here, an Army spokesman said. Two militants, both locals, were also killed in the operation which left a soldier seriously injured.

Col Rai was conferred the Yudh Seva medal on the eve of Republic Day for outstanding contribution in planning and conduct of operations including a gun battle with militants in south Kashmir last year, the spokesman said.

Hailing from Ghazipur in Uttar Pradesh, Col Rai, who belongs to the 9 Gorkha Rifles but was on deputation to RR, is survived by two daughters and a son.

The encounter broke out today when the police assisted by Rashtriya Rifles of the army launched an operation after getting a tip off that a local Hizbul militant along with another accomplice had come home.

The slain militants have been identified as Adil Khan, a local resident of Mindora, and Shiraz Dar. Both were affiliated with Hizbul Mujahideen outfit, police said.  Some arms and ammunition have recovered from the scene of the encounter, they said.