Andy Murray stunned by Gabashvili in US Open tuneup 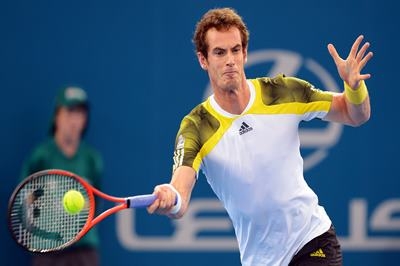 Washington:  British top seed Andy Murray suffered a stunning defeat in his first hardcourt warm-up match for the US Open, losing Wednesday to Teymuraz Gabashvili at the ATP and WTA Washington Open.

The 53rd-ranked Russian outlasted third-ranked Murray 6-4, 4-6, 7-6 (7/4) over two hours and 42 minutes to reach the third round at the ATP and WTA Washington Open. Murray, the first Washington top seed to lose his first match since Ivan Lendl in 1993, served for the match in the third set and was two points from victory before Gabashvili broke to 5-5 and the Russian later took the final four tie-breaker points to secure the triumph.

It was a tough match,” Murray said. “Obviously disappointing not to close out the third set when I had a chance. Struggled  with my rhythm early. There were some good rallies. He served well in the big moments, especially in the third set.” Gabashvili, who was 3-22 against prior top-10 foes, hit 30 winners and only made 15 unforced errors while winning 86 percent of first-serve points in making Murray the highest-ranked victim of his career.

“Anytime you beat Andy Murray 7-6 in the third it’s something special — 100 percent it’s my best victory,” Gabashvili said. It was a shocking defeat for the 28-year-old Scotsman, who sparked Britain’s Davis Cup team past France in July after a semi-final run at Wimbledon. Murray, the 2012 US Open and 2013 Wimbledon champion, has much to work on before the Flushing Meadows fortnight begins August 31. Temu served well but I usually back myself to return better than I did,” Murray said. “That cost me a lot tonight. Pretty frustrating. I was happy with how I moved and did certain things on the court. There are some things I felt I could improve.”

Gabashvili, who will next face Lithuania’s Ricardas Berankis, honed his skills the past three weeks in World Team Tennis, a US league with no-ad scoring and shorter sets where he was named the Men’s Most Valuable Player. “My body is really tired but I learned to play important points and I learned to play aggressive and without fear,” Gabashvili said. “I’m confident now. It really helped me.” Gabashvili, who lost to Murray last year at Shanghai in  Their only prior meeting, broke the Briton with a backhand winner to take the first set after 45 minutes.

Gabashvili sent a forehand overhead smash wide to give Murray a 4-3 edge in the second set. He had a break chance on Murray in the 10th game but sent a forehand volley long and two points later hit a backhand wide to hand the Scotsman the second set. Murray broke Gabashvili at love in the ninth game of the third set and was two points from victory before surrendering a service break on a wide crosscourt backhand.