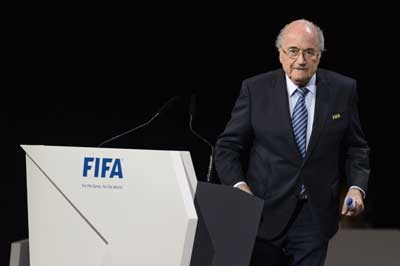 Zurich :  Embattled FIFA chief Sepp Blatter was re-elected president on Friday, even though he was hounded last week by a corruption scandal and public criticism. This will be his fifth term as the head of soccer’s world governing body.

Such was the outcry over Blatter’s refusal to step down that European teams had seriously considered boycotting the World Cup if he remained in office. It remains to be seen whether they will now go ahead with the threat.

Blatter has always maintained that the £100m corruption scandal was a western conspiracy. He had said there would have been no problem if ‘two other countries’ — meaning England and the USA — were awarded World Cups in 2018 and 2022. He had instead awarded them to Russia and Qatar.

President Putin too had hinted at a conspiracy and suggested that the corruption scandal had been orchestrated by the FBI, so that the World Cup could be snatched from Russia.

In the first round of ballot, Blatter got 133 votes, just short of the two-thirds majority required. His challenger, Prince Ali bin al-Hussein of Jordan, got 73 votes. Since the first round was not conclusive, a second ballot was mandatory to determine the winner. It required only a simple majority but the underdog, Prince Ali, conceded defeat before the second round of voting took place.

Blatter has long enjoyed the support of many smaller or developing countries, including India, for whom he has delivered consistent funding.

Finally, he got the widespread support from the Asian and African confederations, who account for 100 votes. On the other hand, Europe and some countries in the two Americas supported Prince Ali.

“For the next four years I will be in command of this boat called FIFA. Beach soccer will be played everywhere,” said Blatter during a long, rambling speech which ended on a rousing: “Let’s go FIFA, Let’s go FIFA. Thank you.”

Blatter has denied responsibility for the corruption scandal engulfing FIFA that has seen seven senior officials accused of “hijacking” international football to run “a World Cup of fraud” by the FBI.