Aligning with future trends is actually a rarity for convention-rooted SMEs. But for 30-year-old Ebullient Packaging that was the way forward, since its inception. Pankaj Joshi writes…
Pankaj Joshi 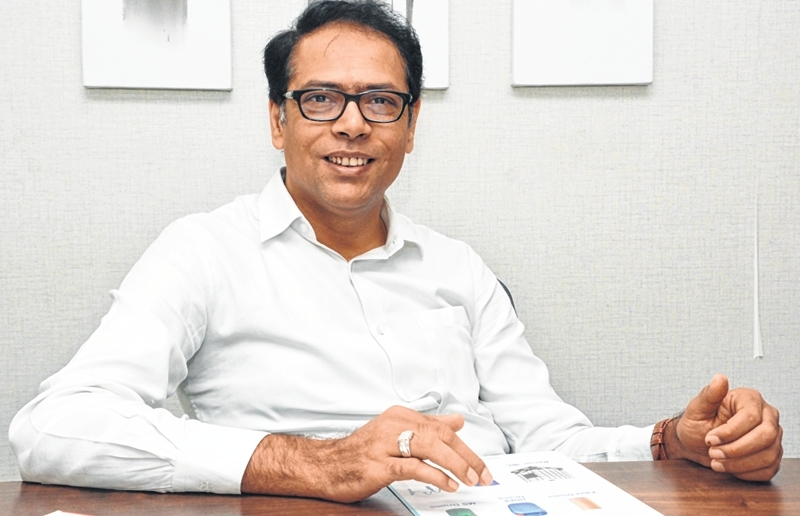 It is estimated that the packaging industry in India is growing at 22 per cent to 25 per cent per annum and is the fifth largest sector in India’s economy.

For Small and Medium Enterprises (SMEs), this could mean a lot. A three-decade old company, Ebullient Packaging, is part of one of the highest growing sectors in the country and hopes to encash some of its growth going forward.

Like many other businesses in the SME space, Ebullient Packaging started off as a partnership firm. Its first identity was Ornate Packers, a partnership firm, founded in 1987 by Uday Mehta. The focus at that time was on reconditioning and refurbishment of packaging equipment, mainly barrels and drums.

This was seen as a rather modest activity, but Mehta's vision was that reconditioning of packaging material is important from the ecological viewpoint and hence there is enough economic sustainability.

As per reports, anywhere between 20 and 50 per cent of the total industrial packaging requirements in advanced nations is meet by reconditioned packaging material.

Recalling a packing reconditioners conference held in Japan (in 2018), Pramod Parmar, Chief Operating Officer (COO) reveals participation from India in the event was extremely limited to a few people like Ebullient.

This low representation from India is mainly because reconditioned packaging has yet to get its due in this country. Around 200 delegates had participated in the conference at that time, he asserts. 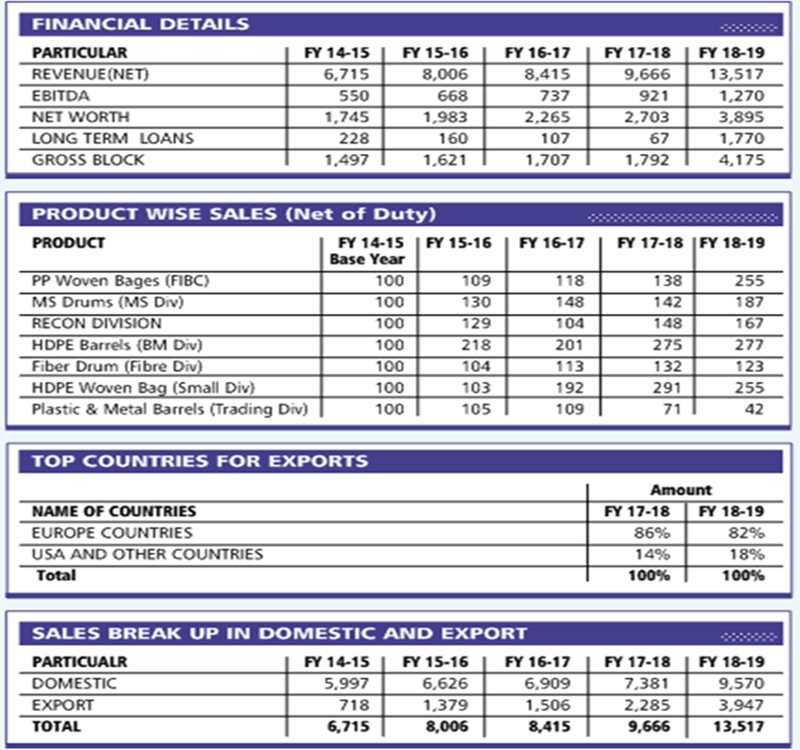 He estimates that India's usage of reconditioned packaging material would be around 5 per cent of the total quantity used. Overseas, companies have explicit or internal commitments to source a specific portion of their packaging material requirements from refurbishment and reconditioning sources.

In case of India, it needs to embrace actionable policies. Theoretically, the government policies do recognise the environment friendliness of reconditioned packaging material, because the lower carbon footprint is evident to all.

Sooner or later, Parmar emphasises, “India will also reach the benchmark levels of developed nations. That is when the founder's foresight would be evident to all.”

Going beyond refurbishment, the company ventured into industrial bulk packaging material. The first manufacturing venture, set up at Silvassa, focused on drums made from mild steel.

The company already had a presence in Silvassa, other than its two locations (Bhiwandi and Taloja) in Maharashtra. Beyond that, the next product expansion of Ebullient was into manufacturing plastic drums and fibre drums (made out of paper), the latter again underlining the eco-friendly focus of the business.

Geographically, the company had moved into a new territory—Bhavnagar, in Gujarat. In 2008, the company initiated another product enhancement in Silvassa—that of flexible intermediate bulk container (FIBC) bags or jumbo bags as they are more commonly known.

For an industry which does not see much capital investment, Ebullient is an exception—its FY2019 gross block stood at around Rs 26 crore. In addition, it has 50 per cent investment in a company, again in the industrial packaging business, where its capex investment is around Rs 9.50 crore. The two numbers emphasise the commitment of the core management to its main activity. 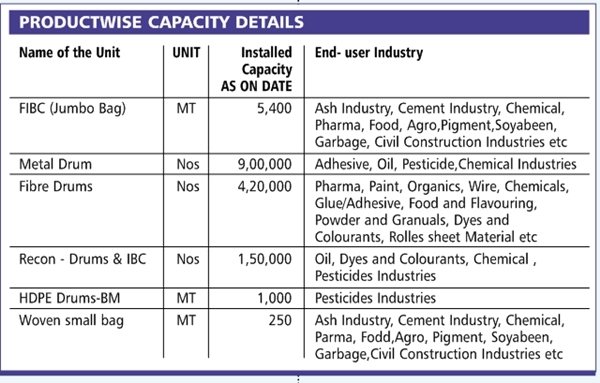 The primary concern—from the supplier side—is norms needed for standardisation. Like all low-capital activities, most players in the reconditioning and refurbishment space tend to be unorganised in nature and neglect good business practices.

Being bracketed with such players does not help companies like Ebullient, states Parmar. Hence, standardisation is an understandable priority.

Beyond enforcement of standards, the next focus is on the demand side. The industry as a whole is hoping for a policy where government organisations (to start with) would be sourcing some part of their packaging requirements from refurbishment sources.

If the state-run refineries could be buying refurbished drums for say 20 per cent of their requirements, it would be a major shot in the arm for the industry. It would lead to a strong leap of growth for the domestic reconditioned metal packaging segment, whose size is estimated at just over one crore barrels currently.

Ebullient has been approached by BASF, a global major in the chemicals space, who has a policy requirement for a specific percentage of its packaging material to come from refurbishment sources, and is looking for quality conscious and reliable supply sources. A policy directive for the domestic user industries can definitely deliver much volume growth. 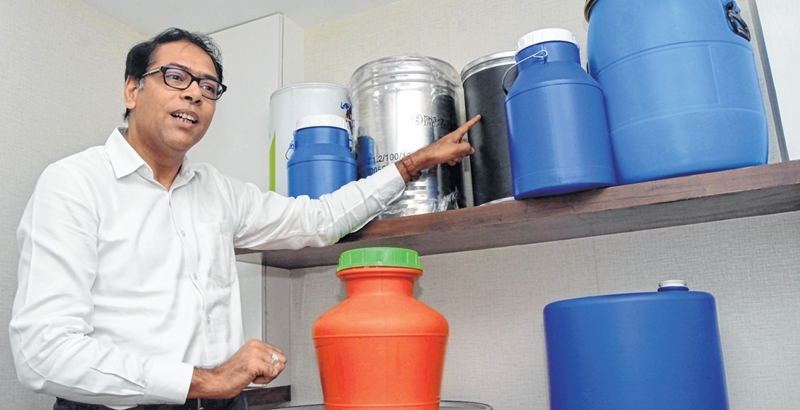 A similar policy initiative has been envisaged in the area of disposal and management of used barrels. In India, Parmar underlines, people habitually store potable matter—water and foodgrains—in plastic drums which have been hitherto used for storage of industrial grade materials like oil, lubricants and diverse chemicals.

Therefore, it makes immense sense to have a handling policy for refurbishment of used barrels and have the handful of organised players in the space take the lead in the matter. Treatment and reconditioning processes need to be laid down, which would ensure safety in their reuse.

Parmar emphasises standards are needed at all levels. While this could seem idealistic, but there is a reason for the same. Most transportation overseas, particularly in developed nations, is done in a bulk packaging structure, a derivative of the strong penetration that containerisation has achieved in those economies.

Accelerator for growth in the sector

From that viewpoint, Parmar emphasises that FBIC bags could be a catalyst for the sector growth. A good part of material transport in India—food, building materials, industrial powders of all types—is still done in open form.

Globally, the sector has evolved to the extent that customised bags are available to ferry around liquid material. “India would be behind the curve”, if not acted on time, added Parmar.

The FBIC product market, a market demanding skilled labour, was initially cornered around 30 years ago by Turkey and China. Turkey lost out as the cost of labour became unmanageable.

China currently is facing challenges, both from ageing of labour and increasing costs. Given that India's labour is comparatively younger and the currency is favourable, there is much to be said for India emerging as a supply centre, or at least holding its own against a threat of cheap imports, claimed Parmar.

In that context it is also to be appreciated that China's domestic demand is high enough to negate a dumping scenario, and may indeed encourage exports from Indian players. As per Parmar, a decent amount of demand has already shifted to India.

With all this perspective, Ebullient is very clear about how it wants to go about with its growth. It has two specific advantages—first having presence in both reconditioned packaging as well as manufacturing of packaging, and the second being a diverse product portfolio.

Combined with maintaining good standards and business practices, it is now a solution provider rather than just be a vendor. Given that it has a portfolio to cater to hard material, powder and even liquid, it can now increase its client base (industries).

Juxtaposed with the growth potential of the domestic market, it then calls for some strong growth plans which is exactly what the company plans. The reconditioning business capacity is being enhanced at Silvassa, with more emphasis on automation so as to be an option for more multinational clients.

Likewise, expansion plan is with the metal drum business. There is a lot of potential seen in the Pune region of Maharashtra. So the company is weighing the option of investing in a facility there, which makes sense because the industrial packaging business will always be localised in nature.

A new product line, geo-textiles, is also being contemplated. This product works well worldwide particularly in the infrastructure space. The company sees a new market and new clientele altogether for itself.

With all this, the targets of the company would naturally shape up to be ambitious. For FY2019, Ebullient clocked revenues in the range of Rs 120 crore, with an additional Rs 20 crore taken as the share of revenues from the joint venture. For the current year, the targets for the two streams are Rs 145 crore and Rs 30 crore respectively.

Over the next five-seven years, Parmar states that Ebullient could reach a revenue size of Rs 500 crore. At that point of time, geo-textiles would be contributing around 25 per cent, and some strong policy support is being factored in.

If this seems too ambitious, Parmar points out that company revenues in FY 2010 were around Rs 15 crore, which means that the company has grown tenfold across the past decade. Truly, a company which thinks that its time has come...