To find an alternative to India’s need for doctors, an expert group gathered at The Free Press Journal (FPJ)- NMIMS University’s education conference ‘Where do I study overseas?’
Jescilia Karayamparambil 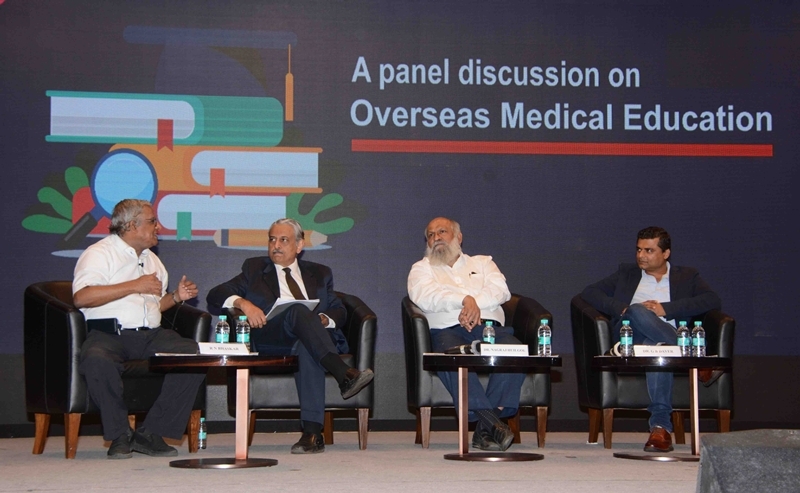 India is a country with aspirations but at times aspiration goes beyond the facts and figures. If you just take an example of India’s famed medical insurance scheme which is expected to reach a large number of underprivileged, economically- backward population, you realise how urgently medical practitioners are required. To reach that large population of over 5 million, there is a need for an army of doctors who can identify and prescribe treatment to the patients.

This session was moderated by RN Bhaskar, Consulting Editor. In his opening remarks Bhaskar said, “Ayushman Bharat (medical insurance scheme) has put pressures on the government for the need for medical professionals, India has to find an answer to the shortage of practitioners.

I do believe that India will have to find a way to initially allow students to go overseas, do the courses, and recognise the certificates in India. So that they can get into India and practice in India; so that the cost of medicare goes down.”

It is no secret that India has one government doctor for 10,000 people. “We have one doctor for 1,457 population. Ideally, the norm is one per thousand. So there itself you have a big gap,” said Dr G B Daver. He went on to add that there are about 9.26 lakh allopathic doctors available. However, the requirement is an additional 5 lakh or more.

“We do have Ayurvedic, Unani and Homeopathic doctors, which account to around 7.8 lakh, but the demand for MBBS is always higher.” According to Dr Nagraj Huilgol, this gap of doctors can only be meet, if medical aspirants travel overseas for medical education.

He strongly advocated the need to promote foreign education right from Bangladesh to China, to Russia, to Kazakhstan. Highlighting the advantages and disadvantages, Dr G B Daver said language can be a barrier for students who go to countries like China, Russia and other non-English speaking countries for medical education.

And language is crucial while interacting with patients, which is half of the study. However, giving a different perspective to the language barrier, Huilgol, said even if an Indian student gets admission in any Indian state which does not have a language he or she is familiar with, there will be a language barrier.

Doctors, he said, learn to cope with such barriers quite quickly. Meanwhile, Huilgol said, “It is much better that the aspirant invests money in learning a foreign language; getting a good NEET score and getting a degree and come back.”

He went on to add that the number of seats that are left in India for aspiring students with little finance is miniscule which is why students go abroad to study.

Adding to the language barrier concept, Dhananjay Shah said in Russia, there are 48 universities approved on MCI list, they all claim to be in English but only six are teaching in English. “The Embassy was given in writing about the problem that is prevailing. It was informed that these are the Universities which are going to teach you in two languages—three years in English and three years in Russian.”

Dhananjay Shah also projected another set of challenges the medical aspirants face. He added that the shortterm vision to get an MBBS admission hurts students in the final leg of getting their license to practice medicine. “Usually in India, parents want their children to study in India. The decision to go abroad is plan B and not plan A.

So they all want to do is to go through the process faster, since they have little time to secure their admission. And they will choose anything that comes their way, in sheer desperation.” While China is rapidly emerging as a premium destination for medical education, the other destinations like Russia, Ukraine, Belarus etc are losing their lustre.

Shah added while countries like China have strict criteria while admitting students; other countries and their universities might admit students even though the student has not enjoyed good scoring in NEET examination. He revealed that other countries do not have standardisation like China.

And with English courses introduced in China, the country is expected to attract more interest of international students mostly Indian medical aspirants. Other than traditional countries mentioned before, there are countries like Bangladesh that are welcoming Indian students too. Dr Nagraj Huilgol added, “I believe Bangladesh is emerging as a very popular destination because it is next door and both countries have similar cuisines at some level.”

According to Shah, about 3,200 people went to Ukraine in 2018, but Bangladesh attracted only 600-700 medical aspirants. Ukraine attracted around five times more students mainly because more than 50 per cent were unscreened students. “So one can image the passing ratio of students from those regions,” added Shah.

He added the difference in the number of students who go to Russia, Ukraine, and all these countries are far more than the one who are going to Bangladesh. “Until last year, there was no screening to go abroad. So everybody was going abroad with or without NEET qualification.”

That is likely to change very soon. Meanwhile, Daver added that in 2018, there were 13.65 lakh candidates that appeared for NEET and in one year this number jumped by 14.5 per cent in 2019.

This shows the opportunity that Chinese medical universities might have from its neighbouring country, India. For over a decade, Dhananjay Shah and his organisation has been assisting medical aspirants to not just go overseas for medical education but also help them prepare for exit exams in India.

“I have visited each and every university that we have placed students in and to many more universities that we are not placing students to. There are huge number of problems in MBBS abroad as well. For instance, people think that because medical aspirants have been going to Russia since 1996 and thousands of doctors have come back to India, they feel the success rate is high.

He added, “So there is a accumulation of more than 25,000 doctors in India right now, who have not passed MCI. But Huilgol believed that even if students did not clear the MCI entrance examination, there were other opportunities offered by the medicare, insurance and pharmaceutical industries either as administrators, or as other support staff.

Moksh, which is training the students to prepare them for their exit exam when they come back to India after their overseas course, finds it difficult to explain the need to focus on the long-term impact of a hasty decision. Shah added. “Your aim should not be limited to getting a degree, but to get the license to practice medicine.”

Currently about 17,000 Indian students are already abroad, but only 2,000-4,000 doctors clear the exit test every year, claimed Shah. Both Daver and Huilgol agreed that MBBS is not enough. Today, most MBBS pass outs will have to do their post-graduation as well.