‘No saviour at all’: John Hawley, the author of 'Krishna's Playground', talks to Nichola Pais about Vrindavan

John Stratton Hawley, author of Krishna’s Playground: Vrindavan in the 21st century, and Ann Whitney Olin, Professor of Religion at Barnard College tell NICHOLA PAIS that until we feel the heat of environmental death, we are apt to deny any hope of our salvation

What makes Vrindavan, known as the spiritual capital of India, special?

People come to Vrindavan to play. The attraction is so irresistible that it sometimes seems the whole of Delhi is there on any given weekend. Some people feel that Bahariji calls them personally.

They can hear his voice — perhaps his flute. For others, perhaps, it’s less personal, but still the focus of a regular practice. I have often found myself in an e-rickshaw with someone who has vowed to be there once a month, or maybe once a fortnight.

Is Krishna’s playground of significance only to Hinduism or to spirituality at large?

In part, I believe, it is the call of the past—a widely shared past, something close to the heartbeat of the religious life of the nation. But that doesn’t mean it’s just Hindu—that is, Hindu in the narrow sense we have come to accept today. In fact, Vrindavan was established in the 16th and 17th centuries as a result of an explicit concordat between Muslims and Hindus—Emperor Akbar and his primary general Mansingh Kachvaha of Amer, today’s Jaipur. Surdas was celebrated there, but so also was Kabir.

Is that “spirituality at large”? It’s close enough for me. What are the factors threatening Vrindavan’s existence?

There’s plenty of blame to go around. There was the Mathura Refinery and the rough and boozy culture of some of its workers, thanks to Indira Gandhi. There was Mayawati’s attempt to build a ring road around the town. Plans first launched in the time of Akhilesh Yadav’s government tried to discipline the Yamuna into a sort of canal and again separate the ghats from the river. The current government does nothing to reverse that trajectory. Development grows apace.

This, I suppose, is the political and economic performance of religion. It certainly isn’t new to history, but it’s galloping now. And a theme-park mood pervades especially the newer parts of town. We shouldn’t chalk that up to anyone’s politics, but it’s sure a fundamental change. This too is lila, but without real-life actors.

And there’s a raft of everyday concerns: the open sewers in the older part of town and the way they spill untreated waste into the river; the repellent smells; the free-roaming pigs that form a centuries-old part of the sanitation staff; the plastic bags thrown everywhere; they also end up in the river; the mass of billboards that line the streets—almost all religious events and real estate; the intractable traffic jams in both the older and the newer parts of town; the loudspeakers that spew forth religion at all hours of the day and night; the corruption at every level; and the water. The Yamuna is so polluted that her ancient vehicle, the turtle, no longer comes there — except occasionally, with luck, in the monsoon.

How can it be conserved for generations to come?

I pray that various actors can find the courage and spirit of cooperation to landmark parts of Vrindavan — landmark what remains against the ravages of the future. That future, in fact, is now. 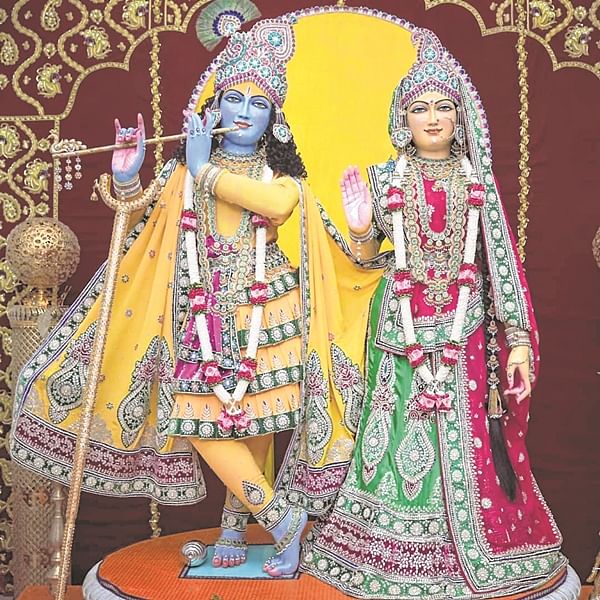 Applying for the status of World Heritage Site would be a good start. And we must forbid development on the other side of the river. If we lose that pastoral scene, why come here at all?

How relevant is the life and philosophy of Krishna today?

Childhood is always relevant to adulthood. The fact that all children can be lulled to sleep with a lullaby is species-wide. And we all love the sound of music — at least if it isn’t too loud. I hear Krishna’s flute in that. It’s his essential weapon in the culture of Vrindavan.

The performance of the Bhagavad Gita is traditionally forbidden in Vrindavan. That cannot become a subject of the ras lilas. It’s the joys and sometimes strains of childhood that are being celebrated and re-enacted here, not the bloody negotiations of adult life. And love to the exclusion of hatred. Love may have its tensions, its little plots, but the name of the game is never hatred.

When religion is mobilised in the cause of hatred, we know that Krishna is a stranger to that game. It was only in the cause of undoing the fruits of hatred that he allowed himself a role in the Mahabharata war. He is subtle. He shows us that our certainties about being on the right side of history should not be so certain.

Is the world in need of another saviour who is yet to come?

I love this question. I hear echoes of Kalki, the second coming of Jesus, Kali, the 12th Imam. I also hear the threat of Judgement Day. I fear that Judgement is closer than we know. It’s a bleak moment for the world, and the state of Vrindavan testifies to it. There may not be a saviour at all. I certainly doubt its name is

It may be that Krishna remains our mysterious and elusive saviour as we make our way through the crisis of climate that threatens the whole planet. Well and good: I hope so! But I think we have to do our own part, serving as saviours to ourselves.

It seems almost impossible that we could wake up to the planetary challenge that the overwhelming of Vrindavan registers so eloquently. It’s an age of “Me First,” instead.

Actors like Donald Trump and the Brexitwalas are taking a hammer to the structures of global cooperation. Who can teach us to love one another and act in the common good — I mean the common planetary good? I can think of some terrific NGOs, some fine religious leaders, and big-thinking historians like Ramchandra Guha and Dipesh Chakrabarty.

But none of these can save us unless we want to be saved. Until we feel the heat of environmental death, we are apt to deny any hope of our salvation.

HomeFeatured-blog‘No saviour at all’: John Hawley, the author of 'Krishna's Playground', talks to Nichola Pais about Vrindavan