Seeking the Arjuna Krishna within

From seer Adi Shankara who called the Gita “an epitome of the essentials of the whole Vedic teaching” in 800 CE to Sant Dnyaneshwar who interpreted the Holy Gita in the Advaita tradition in his Bhavarthdipika, 490 years later to Bal Gangadhar Tilak, Vinoba Bhave, Mahatma Gandhi, Sri Aurobindo, Sarvepalli Radhakrishnan, and Chinmayananda have all interpreted Hinduism's best known and most famous text The Bhagavad Gita.

Speaking of TBW she underlines, “Though the Gita happens on the battlefield of Kurukshetra where two arms of a clan are locked in a fight to finish this universal text also metaphorically is speaking of the on-going battle within. 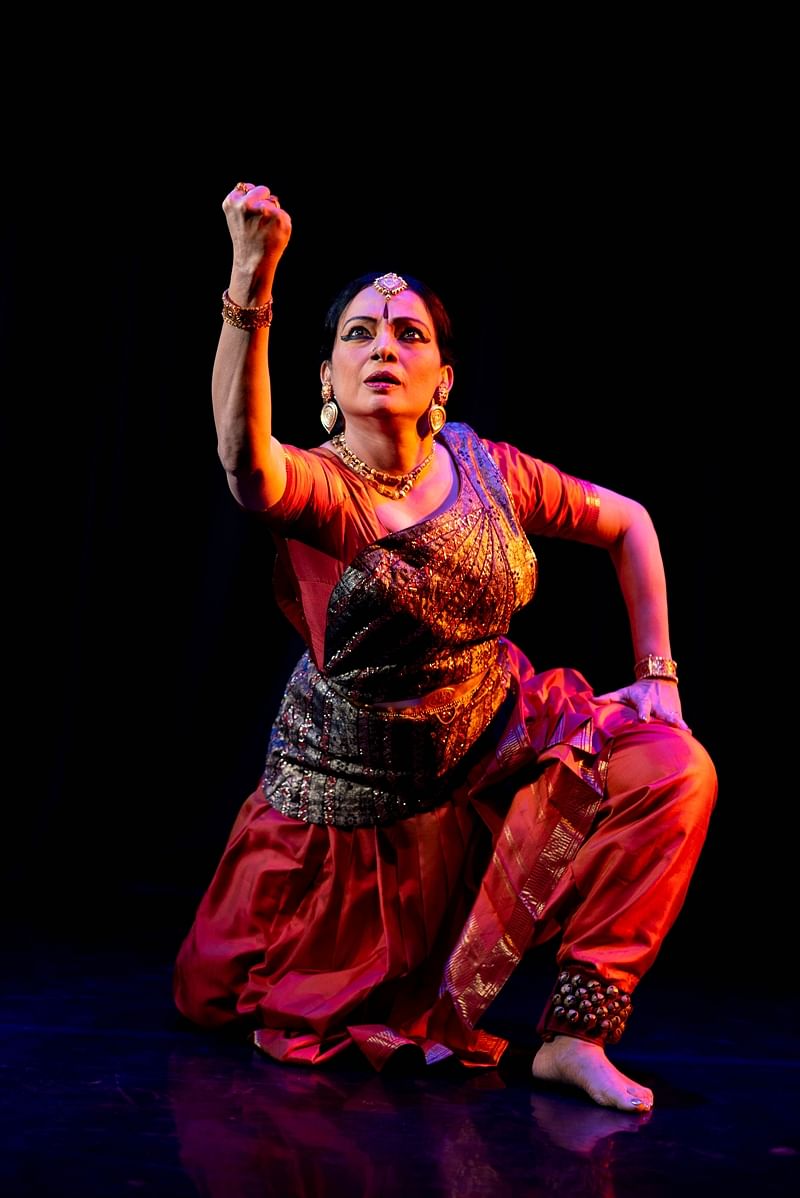 Kurukshetra is after all both a physical and psychological battlefield,” and adds, “This means travelling deep within to look for the Pandavas (righteous), Kauravas (negative), Arjuna (conscience) and Krishna (the voice of the soul) within.”

This Bharatanatyam exponent who seeks both interpretation and expression in her dance, finds the complete terrain of inner emotions a fertile field for exploration.

“Arjuna’s conflict, despair, aggression are both individual and universal at once. The audience can identify and connect with every emotion he feels,” she says when asked about audience connect.

Celebrated filmmaker Sumantra Ghosal, Sarukkai’s creative collaborator has used light and projection, to bring the text alive visually enhancing the cosmic worlds represented in the dance. This coming together of sound, light, music, text and dance seamlessly is what makes TBW special.

The illustrious list of adaptation of the Gita — which includes both Philip Glass’ and Douglas Cuomo’s operasque takes, the National awardee namesake Sanskrit film by G V Iyer and Steven Pressfield’s novel The Legend of Bagger Vance (where the golfer is Arjuna and his caddie Krishna) — seems to have found a worthy addition in TBW.

Speaking of the challenges in the concept and choreography of this solo 70 minute production Sarrukai admitted to it being in the works for several years now.

“There’s such a stereotype of this lyrical lithe, feminine dancer. It is easy to succumb and start living and dancing that as the truth. It needed special effort to work on becoming the two male characters Arjuna and Krishna, even while locating them in the larger scene of the epic discourse.”

For this she credits her mother introducing her to the Gita. “While being brought up the Gita only got mentioned because my mother (Saroja Kamakshi Sarukkai) read it regularly. It later re-entered my life and researching the text left me bewitched.

My creative urge to interpret it grew from there,” she says but modestly credits Murali Parthasarathy’s powerful music and sound designer Sai Sravanam’s recording for reinforcing her concept and choreography.

The costumes are by Delhi-based designer Sandhya Raman, lights by Niranjan Gokhale while filmmaker Sumantra Ghoshal, who is also the creative collaborator has created the visual design for the production with LED screens.

Taking up novel themes isn’t anything new for Sarukkai who has brought both refreshing subjects and innovative choreographies to audiences worldwide. From Bird Song, written by her sister, Priya Sarukkai Chabria, to Raas which mirrors the Gopis’ ecstasy when they go to the woods lured by Krishna’s flute to Thari — The Loom which looked at the sari as metaphor for life and her special production on environmentalist Saalumarada Thimakka have all carried her signature mark just like TBW.