Are you a blamer or a problem solver?

There are two categories of people as far as this topic is concerned. One category is the group of Blamers and the other category is the Problem Solvers, writes Dr Shrirang Bakhle

“Yeh sab tumhare laad pyaar ka natija hai!” (“Our son/daughter has got spoilt because of your pampering!”) So shouts the typical father at the typical mother in the typical Hindi movie! Finding someone to blame for any problem is a favourite pastime for all of us.

There is this joke. An irate husband complains to the in-laws about his wife: “Your product has a manufacturing defect. Please replace!” The in-laws reply: “The product is more than eighteen years old. Manufacturer’s liability is over. It is now the user’s responsibility!”

A few times like this, the blaming can be funny. But more often, it generates a lot of bitterness – and politics! If we understand the dynamics of the Blame Game, we can avoid the bitterness and turn it into a productive exercise.

The Blame Game keeps happening everywhere, all the time: at home, in the office, in social groups (such as building societies) etc. But the undisputable masters are the politicians who love to blame the opposite parties for personal gains.

This game begins with a problem – any problem. The problem may be as simple as the child forgetting to take a notebook to school or it may be as big as the country’s team losing in a match. The essential first step in the Blame Game is to consider the problem as a ‘mistake’. Obviously, if it is a mistake, it has to be somebody’s mistake!

One key feature of human intelligence is the ability to identify causes of events – and problems. If we get a stomach upset, immediately we think, “What did I eat yesterday?” If a company starts making losses, everyone starts thinking, “Why?” When a neighbour’s family ends in a divorce, everyone goes into overdrive thinking about the causes.

The most important point to understand is this: was the problem caused by the mistake of a human or was it the result of unfortunate circumstances? And even if it was the mistake of a person, was it an unintentional mistake or was it a deliberate harm? This analysis decides what will be the outcome of the game. 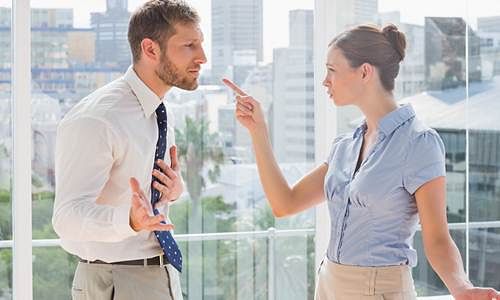 There are two categories of people as far as this topic is concerned. One category is the group of Blamers and the other category is the Problem Solvers. These two persons have quite different attitudes towards the topic of ‘problems’. And hence they take the issue to totally opposite directions.

The Blamer is always convinced that every problem is hundred percent the result of somebody’s mistake. Hence they believe that ALL problems are ALWAYS avoidable! They refuse to believe that problems can happen because of unfortunate circumstances.

For example, if some family member becomes sick, the Blamer is absolutely sure that the sickness happened because of someone’s mistake. So this person’s analysis does not go in the direction of what caused it, but rather who has caused it. So the Blamer thinks, “The patient must have done something wrong or must not have taken care or forgotten to take medicines or some such mistake.”

The Blamer then feels it necessary to publicly put the blame on that person – with lots of harsh words. “You are so incompetent, careless, and insensitive. If you were more careful, this problem would not have occurred. You are responsible for all the sufferings of all the people.” And so on. For the Blamer, punishing the guilty is far more important than solving / preventing problems.

The Blamer naively believes that if you publicly scold or humiliate or punish the guilty person, s/he will feel truly guilty and will fall on knees begging for forgiveness and repent! Actually, in the real world, in case or real people, nothing like this happens! If you publicly humiliate a person, the person becomes very angry. And like every angry person, s/he seeks revenge.

The person then retaliates – either by shifting the blame back on to the Blamer or by remembering some mistake that the Blamer had made earlier. This naturally makes the Blamer angrier. And so the duel begins!

Most importantly, this exercise, which began as a ‘cause-finding and problem-solving exercise’, goes in a totally unpleasant and counterproductive direction. One encounters such Blamers everywhere: at home, in the office, in social groups (including whatsapp groups!) and in government / politics.

On the hand, the Problem Solvers have a totally different attitude. They never lose sight of the basic aim: to solve the problem or to ensure that the problem does not occur again! They understand that every problem is not necessarily caused by somebody’s mistake.

Problems can happen because of unfortunate circumstances, too. So, they don’t rush into a CID or Police mode when they encounter a problem. They don’t adopt the roles of police or judges. They remain administrators whose job is to ensure smooth functioning – of home or office.

But, suppose the problem is really caused be someone’s mistake. Then how does the Problem Solver respond? Suppose there is some function – at home or in the office. One person has been given the job of purchasing the gifts to be given. And the person forgets.

Or, suppose there some fault in the computer and the job of calling the mechanic has been entrusted to someone. And s/he forgets. How does the Problem Solver respond? Undoubtedly, sometimes scolding has to be done. The Problem Solver prefers to do it in private and not publicly – to avoid unnecessary humiliation of an otherwise good person. But sometimes, the scolding has to be done publicly – so that everyone learns the lesson. The Problem Solver does it proactively – with a genuine aim of preventing problems in future. And not as a means releasing pent up frustrations.

One typical human tendency is to avoid the blame by passing it on to someone else. If the blaming and scolding is harsh, there is more tendency of passing the buck. If the cause –finding is genuine, people are more likely to take the responsibility for their mistakes.

Take the case of the recent train accident. What did the sensationalist television channels shout as their headlines: “Who is responsible?” None of the media discussed what specific steps need to be taken to prevent such accidents in future. The Blamers or the Problem Solvers – which group do you belong to?

HomeCmcmAre you a blamer or a problem solver?