Would love to do full-length action role: Angana Roy 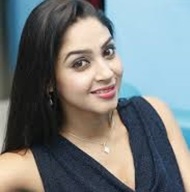 Chennai: After her brief stint with action in the upcoming Tamil thriller “7 Naatkal”, actress Angana Roy now wishes she lands an opportunity to do a full-length action role. She says she would love to do something on the lines of Telugu film “Arundhati”.

“I would love to do an action-based film a la Anushka Shetty’s ‘Arundhati’. It’s unfortunate that women in southern cinema don’t have great scope to do action. It would be really awesome to see a woman-centric action film,” Angana told IANS.

In “7 Naatkal”, directed by debutant Gautham, Angana plays a character around which the entire story revolves. The film’s story unfolds within a span of seven days.

Also starring Sakthi and Nikesha Patel, the film is gearing up for release in October. Angana, meanwhile, is looking forward to the English-Hindi bilingual project. She says it will be her career’s biggest project.

She also has a film each in Bengali and Telugu in her kitty.