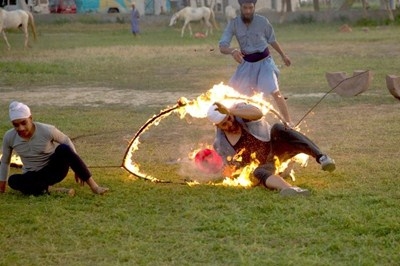 Well, our Bollywood’s most wanted action hero landed up injuring himself while shooting his introductory song ‘Tung Tung Baje’ from Singh is Bliing. The song has many stunts performed by Akshay himself.

What we hear is that, while shooting for a stunt, he had to jump from the fire hula loop. But while doing that his leg caught fire and immediate actions had to be taken to extinguish the fire.

A source close from the production team says,” Akshay sir speaks volumes of professionalism, whenever it comes to doing stunts; he always prefers doing it himself and not using a body double. So while jumping from the fired Hulaloop, Akshay sir’s leg caught fire.”

“Immediate actions were taken to put the fire off. Even after the accident, Akshay sir was adamant to perform the stunt again,” added the source.

Could this be AK’s biggest musical blockbuster film? Well, as per the sources,” It might be his biggest musical blockbuster because the forthcoming songs as great as this and can beat” ‘Tung Tung Baje’s” record creating a new benchmark in the history.” Not just 24 hours from the release of the new song ‘Tung TungBaje’ has already hit one million views. It’s tungtung everywhere and the pre-launch of a song has already created a buzz on social media. Within just few hours of the release of the song, the #tungtungbaje trend had gained the momentum, making it the latest Bollywood trend of the day.

After all the burning and the pain, Akshay’s efforts have paid off.