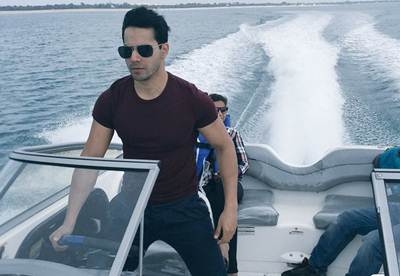 After his stint with fast cars in DILWALE, Varun Dhawan is set to try his hand at speed boats. VarunDhawan, John Abraham, Jacqueline Fernandez and director, Rohit Dhawanare currently busy on the terrains and seas of the Middle East, shooting their upcoming film Dishoom.

To make the scene look authentic, Varun is actually learning how to drive a speedboat.The young actor wakes up earlier than the rest of the crew so he can train himself for the scenes.A source quoted, “Varun wakes up at 6 am, earlier than the rest of the unit, to start training. This particular scene will be high on action and Varun is working hard to make it look authentic. He’s in the UAE for a 35-day schedule.”

The actor also quoted saying, “The team has got me a trainer called Tony who has worked with several stuntsmen for water-based action sequences, It’s a big and expensive scene so I have to be very confident when I’m driving the speedboat. We have to clock speeds of 200 km per hour. I have had a couple of sessions already. It’s a lot of fun to be hitting the waters at that speed.”

Wehear that VarunDhawan and Jacqueline Fernandez are have a gala time in Abu Dhabi during the shoot. While the cast is making the most of their time in the foreign land, they’re also working out with all their might to give some productive inputs to the upcoming film. Also, since it’sRohitDhawan’s film, he’s making sure that brother Varun also puts in a lot of efforts to make the action scenes look authentic.