Actor-comedian Kapil Sharma recently lost his temper on Twitter after a user taunted him over the arrest of fellow comedian Bharti Singh by in a drug-related case.

Both Kapil and Bharti feature on the ‘The Kapil Sharma Show’.

Taking a jibe at Bharti the user wrote, “Bharti ka kya haal hua? Tb jb tk pkdi nai gyi ..drugs nai leti thi.. Wo hi haal aapka h shayad jb tk pakde nai jao..no drugs (What happened to Bharti? Until she got caught, she said she did not take any drugs. I think it is the same case with you. Until you get caught, you say ‘no drugs’)”

Kapil hit back by tweeting, “Pehle apne size ki shirt silwa mote (Fatty, first get yourself a shirt that fits).”

Upon receiving flak over his body shaming remark, Sharma deleted the tweet. 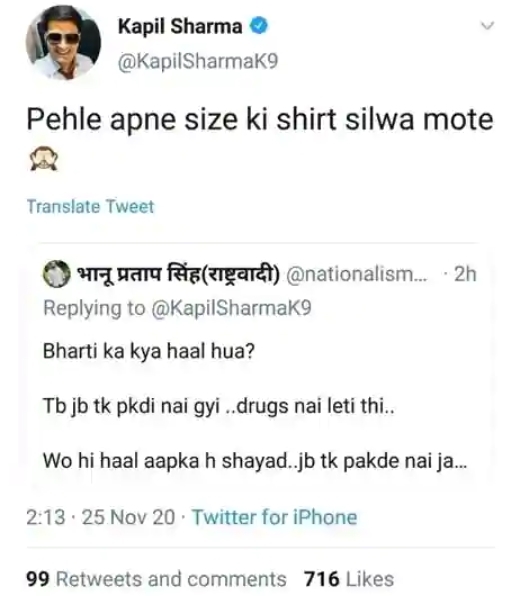 Earlier this week, a Mumbai court granted bail to Singh and her husband Haarsh Limbachiyaa, who were arrested after seizure of drugs from their house in suburban Mumbai.

The magistrate's court granted bail to the couple on a bond of Rs 15,000 each.

Singh, who has appeared in a number of comedy and reality shows on TV, was arrested on Saturday night by the Narcotics Control Bureau (NCB), while her husband was taken into custody on Sunday morning following seizure of ganja (cannabis) from their house in suburban Andheri.

They were produced on Sunday before the magistrate's court which remanded them in judicial custody till December 4.

They then filed bail pleas through their advocate Ayaz Khan which were posted for hearing on Monday.

The NCB had recovered 86.5 gm of ganja during the search their residence and office.

This is considered as 'small quantity' under the Narcotic Drugs and Psychotropic Substances (NDPS) Act, an official earlier said.

Singh and Limbachiya were booked under NDPS Act Sections 20(b)(ii)(A) (involves small quantity of drugs), 8(c) (possession of drugs) and 27 (consumption of drugs).

The NCB has been probing the alleged drug use in Bollywood after the death of actor Sushant Singh Rajput in June this year, on the basis of WhatsApp chats involving drugs.

The names of Bharti Singh and her husband cropped up during the interrogation of a drug peddler. In Pics: Comedian Bharti Singh steps out of Jail after getting bail in drugs case