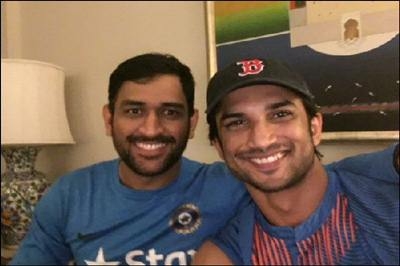 By now, we all know that Sushant Singh Rajput will be playing the onscreen version of M.S.Dhoni in the cricketer’s biopic ‘M.S. Dhoni: The Untold Story’. He was one of the zillion plus people who had turned up to watch the much awaited India-Pakistan T20 cricket match that had taken place late last week.

Post the team’s victory, Sushant Singh Rajput met the ‘Captain Cool’ aka M.S. Dhoni himself to share the team’s joy. Post their meeting, he tweeted a picture of him with M.S.Dhoni with the caption stated, “Last night.. It can’t get better and bigger than this..!! #IndvsPak @ArunPandey99 #BleedBlue @foxstarhindi”

Besides Sushant Singh Rajput, ‘M.S. Dhoni: The Untold Story’ also stars Kiara Advani, Herry Tangri and Anupam Kher in the lead roles. Directed by the much acclaimed Neeraj Pandey, the film is all set to release on September 2 this year.