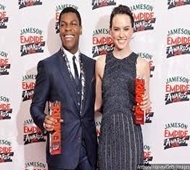 “Star Wars: The Force Awakens” lead stars Daisy Ridley and John Boyega each won an honour for the best newcomer. Ridley said in her acceptance speech that it was “an
amazing time to be a woman in film” while Boyega said it had no benefit to complain about the lack of roles for black and minority ethnic actors.

Matt Damon picked up the best actor award for “The Martian” and he was on hand to accept the trophy. His “Bourne” director Paul Greengrass handed him the award and the actor was delighted because he didn’t know that the filmmaker would be there. The ceremony was hosted by writer and comedian David Walliams.