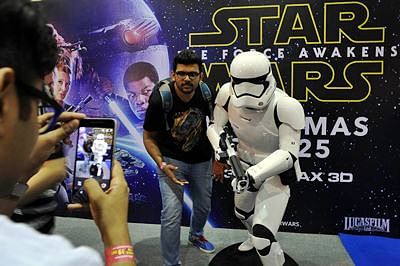 An Indian Star Wars fan gets himself photographed with a 'Stormtrooper' character from the latest film "Star Wars: The Force Awakens" at the 'Mumbai Film and Comic Con 2015' in Mumbai on December 19, 2015. "Star Wars: The Force Awakens" smashed the opening night record in the United States and Canada and was poised to become one of the biggest grossing movies ever, industry experts said. AFP PHOTO/ INDRANIL MUKHERJEE |

Final slate of the final shot. VIII is officially wrapped. Cannot wait to share it with you all! –@rianjohnson pic.twitter.com/l4Apk0Ro4i

He shared a 5-second video, showing the final clapperboard for the shots. He wrote in the caption, “Final slate of the final shot. VIII is officially wrapped. Cannot wait to share it with you all!”

The eighth installment of the “Star Wars” movie franchise centers on the story of Rey (Daisy Ridley), Finn (John Boyega), Poe Dameron (Oscar Isaac), Luke Skywalker (Mark Hamill), Leia (Carrie Fisher) and other characters as they fight back the force of the First Order.

New additions to the cast members include Benicio Del Toro, Laura Dern and Kelly Marie Tran. “Star Wars Episode VIII” is slated for a December 15, 2017 release in the US.