Just like the earlier Dabangg films, the trailer is sure to be a complete package of action, drama, and comedy
FPJ Web Desk 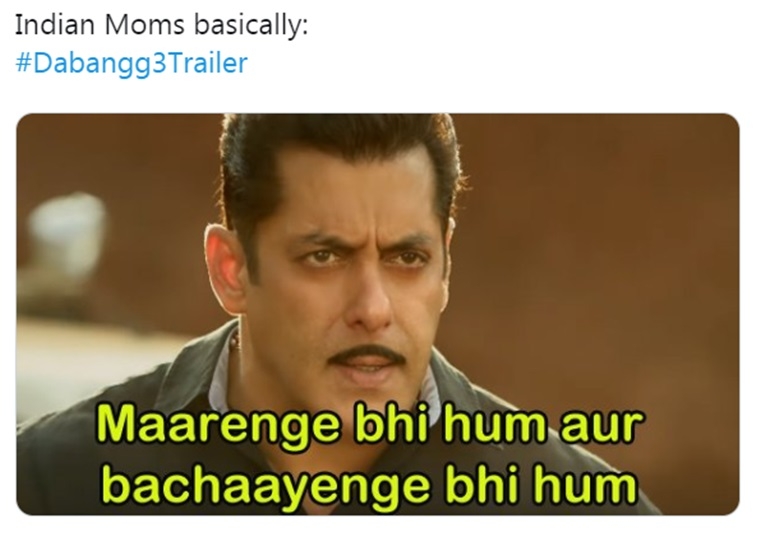 In the trailer, the 'Wanted' actor introduces the audience to his wife 'Rajjo' played by Sonakshi Sinha and veteran actor Mahesh Manjrekar's daughter Saiee.

Just like the earlier Dabangg films, the trailer is sure to be a complete package of action, drama, and comedy. It portrays the 53-year-old actor wearing sunglasses at the back of his collar in different styles.

The trailer however, triggered a meme fest on social media. Here are some that will tickle your funny bones.

Me when ice cream slides down my face while eating it #Dabangg3Trailer pic.twitter.com/4mYdFoSbyH

#Dabangg3Trailer
When you see your gf with her male "bestfriend" pic.twitter.com/9keW3Qv9k9

#Dabangg3Trailer #Dabangg3
1. The english sentences when I build them in my mind
2. The same sentence when I say them pic.twitter.com/Dk40Ibc4kW

Me after eating baba elaichi: pic.twitter.com/z72msY7O3m

In the previous franchise the 'Ready' actor was delivering famous dialogues like 'Swagat Nahi Karogey Humara' and in the trailer, the dialogue of the movie is 'Swaagat toh Karo Humara'.

Sudeep Sanjeev plays the villain in the film directed by Prabhu Deva and produces by Salma Khan, Arbaaz Khan and Nikhil Dwivedi 'Dabangg 3' is slated to be released on December 20, 2019.

Dabangg 3 Trailer: Salman Khan is back with a bang as Chulbul Pandey