Sajid is my rakhi-brother: Tamannah Bhatia 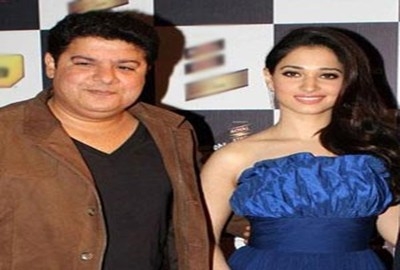 New Delhi: Actress Tamannah Bhatia, who stars in Sajid Khan’s ‘Humshakals’, said the director is like her brother and she feels awkward to hear link-up rumours about them.

Tamannah, 24, who made her Bollywood debut with Khan’s ‘Himmatwala’ opposite actor Ajay Devgn, finds the rumours of their affair hilarious.

“Sajid is my brother. I also tie him rakhi. I find the rumours hilarious. If a director believes in an actor, they should not be linked. It gets awkward,” she said in an interview here.

There have been reports that Bipasha is not promoting the movie because she felt sidelined opposite Tamannah and Esha.

“It is a fact that Bipasha is not promoting the film but I don’t exactly know the reason behind this. But there was no such atmosphere on the sets. We all got along well. Sajid made clear from the beginning who had what role and for what duration,” she said.

The actress hailed Sajid, saying nobody makes a commercial comedy the way he does and even though ‘Himmatwala’ did not do well, she had no qualms in working with him again.

“There are ups and down in one’s career. I completely value Sajid’s ability to be a fantastic comic director. ‘Housefull’ and ‘Housefull 2’ were brands at their time. Sajid has the capibility to freshen up a comedy,” Tamannah said.