'It's not a race thing': 'The Family Man 2' creators Raj and DK on Samantha Akkineni's brown face controversy

As the series premiered last week, a section of netizens was irked by Samantha sporting a brown face and called it outright racist.
FPJ Web Desk 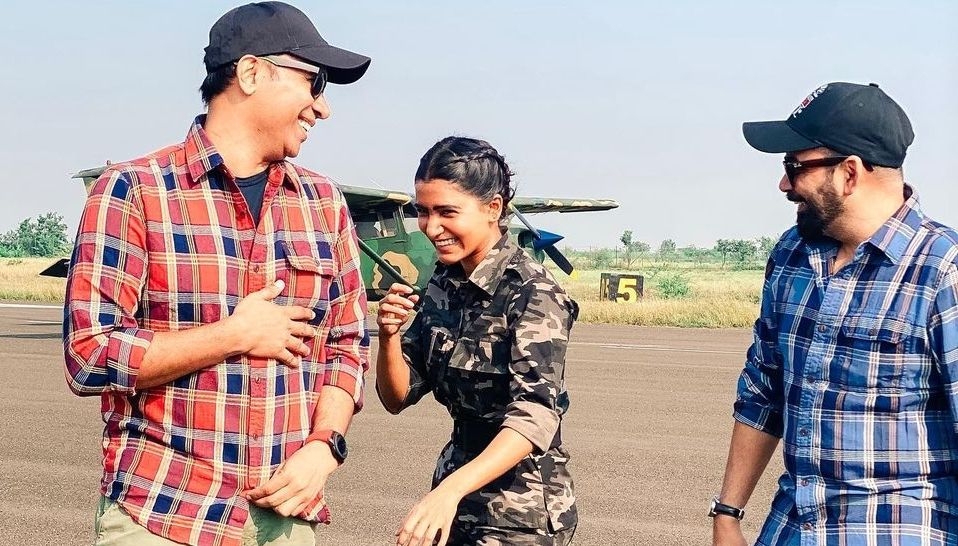 South star Samantha Akkineni said she was particular about playing her "The Family Man" S2 character Raji with a "balanced, nuanced and sensitive" approach.

The sophomore season of the Amazon Prime Video series, which premiered on Friday, has actor Manoj Bajpayee's Srikant Tiwari pitted against a new and powerful adversary, Raji, a Sri Lankan Tamil liberation fighter.

As the series premiered last week, a section of netizens was irked by Samantha sporting a brown face and called it outright racist.

This is something that has been a highly debatable topic in the showbiz arena. Earlier, actors like Alia Bhatt, Hrithik Roshan, and Aahana Kumra have also received backlash for the same.

Dismissing it all, filmmaker duo Raj Nidimoru and Krishna DK told Film Companion that they aren’t irresponsible filmmakers and Samantha’s look has nothing to do with race.

Raj said, "This whole thing comes in the context of beauty, when you're trying to say dark skin is not beautiful and fair skin is beautiful. This is not that context. It's not a race thing either. These are the two contexts where it should be looked down upon and we are well aware of it. It's not like we are irresponsible filmmakers, to propagate something of that kind."

He added, "She's a soldier, she's a weather-beaten girl, there's no time for worrying about self-care. If you're a solider in the Himalayas, your face is going to be red, that's the makeup."

On the other hand, DK said, For three months she did intense training and got these biceps. She learned martial arts from the choreographer, and took classes, and that's why the action is good. She learned this particular dialect of Tamil, which is not her usual Tamil. Now add to that the concept of hair, makeup and costume, that is the complete character that we are presenting. This is the character of Raji; she looks a certain way, she walks a certain way, and she's a killing machine, and that's all there is to it."

Akkineni is best known for her roles in "Eega", "Mahanati", "Mersal", "Anjaan".

In a lengthy Instagram post, the actor charted her journey with Raji, a character which she said serves as a much-needed reminder to come together as a society to eradicate "hate, oppression and greed".

"I was particular about Raji's portrayal being balanced, nuanced, and sensitive. I want Raji's story to be a stark, much-needed reminder for us, more than ever before, to come together as humans to fight hate, oppression, and greed. If we fail to do so, countless more will be denied their identity, liberty, and their right to self-determination," the actor wrote.

Before the release, the series faced opposition from Rajya Sabha member and MDMK leader Vaiko and Naam Tamilar Katchi (NTK) Founder Seeman, who demanded to stop the broadcast of the show for showing Tamilians in a negative light.

At the time Raj Nidimoru and Krishna DK had said they respect the sentiments of Tamil people and have come up with "a sensitive, balanced, and riveting story".

Akkineni, 34, said her preparation for Raji involved watching documentaries about the Tamil struggle and she was devastated to see the suffering of Tamils of Eelam, especially women.

"The creative team shared documentaries of the Tamil struggle that included stories of women in the Eelam war. When I watched those documentaries, I was aghast and shocked by the troubles and unspeakable grief that the Tamils of Eelam went through over an extended period of time," the actor wrote.

She added the ghost of the war still haunts those "who continue to live in far away lands with the wounds of the civil strife still fresh in their hearts and minds." The first season of "The Family Man" premiered in September 2019 and opened to great reviews.

The season two is recreating history with critical appreciation for the performances and gripping storytelling.

Akkineni expressed gratitude to her fans for their overwhelming response to her portrayal of Raji, a character, which she said will always hold a special place in her heart.

"Reading all the reviews and comments fills my heart with so much joy .. RAJI will always be special." Watch: 2021 ‘crush’ Abhay Verma aka Kalyan/Salman from 'The Family Man 2' has a special message...