Adil claimed that four women with the initials -- MK, MH, SA, and KK or AK, had 'illicit relationships with former top general' of Pakistan

Pakistani actresses Sajal Ali, Mehwish Hayat, and Kubra Khan have reacted after an ex-Pakistani army officer Adil Raja made accusations against several "top models and actresses". They have shot down the allegations that they were being used as 'honey traps' by the country's army.

According to several media reports, Adil had claimed that four women with the initials -- MK, MH, SA, and KK or AK, had 'illicit relationships with former top general' of Pakistan. In a video released on December 31, Adil claimed that four 'top models and actresses' would 'fraternise with the former officials and politicians'. However, he just used the initials and did not name the actresses anywhere.

Sajal took to her official Twitter account on January 2 and wrote, "It is very sad that our country is becoming morally debased and ugly; character assassination is the worst form of humanity and sin." It is said that she reacted to Adil's claims, however, Sajal didn't name anyone.

Kubra Khan also responded to the ex-military officer's allegations saying that she will take action against him. She asked Adil to come up with proof within three days or apologise. On the other hand, actress Mehwish Hayat called the allegations 'baseless'. She took to her Instagram stories and wrote, "Sasti shohrat haasil karne k liye kuch logue insaaniat k darjay se bhi girjatay hain. Hope you're enjoying your two mins of fame. Just because I am an actress doesn't mean my name can be dragged through the mud."

"Shame on you for spreading baseless allegations and insinuations about someone you know nothing about and even bigger shame on people who blindly believe this bullshit. But this stops and it stops now! I will not allow anyone to defame my name in this way anymore," she added.

Mehwish is known for playing a pivotal role in the Marvel show 'Ms Marvel'. 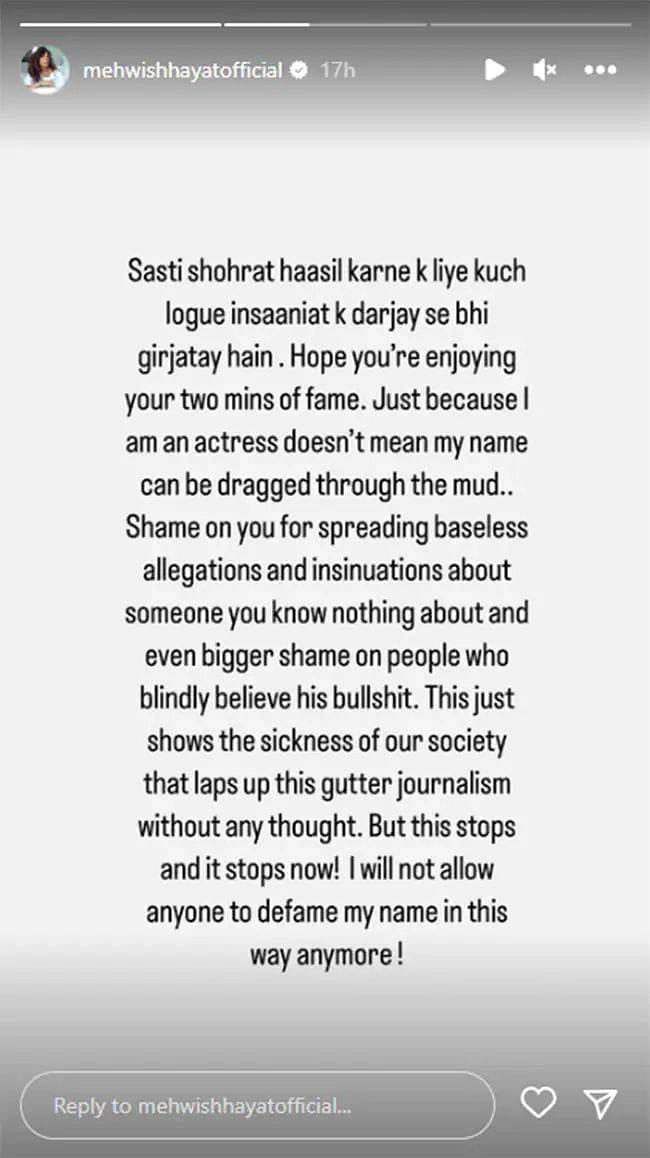 On January 2, Adil Raja tweeted, "There are numerous names of models, actresses, and celebrities in Pakistan and abroad, with the initials that I have mentioned. I do not endorse and condemn any of the names of the celebrities being mentioned by anyone on any forum/social media in this regard."

He wrote in another tweet, "I'm appalled at the social media trends and mindset of our society, which is fixated on the women being abused instead of the abusers and the cause of abuse. I'm disappointed and feel ashamed at the debate on social media regarding the defamation of certain actresses."

According to media reports, Adil is a retired Pakistani military officer and YouTuber.

Meanwhile, Pakistani politician Hina Parvez Butt reacted to the controversy and said it is 'unacceptable that women are targeted in such an insidious manner'. She tweeted, "It is absolutely appalling to come across a vile and vicious smear campaign against actresses in Pakistan. It's unacceptable that women are being targeted in such an insidious manner. It is high time we take action to ensure this kind of malicious behavior doesn't go unchecked.

Read Also
Urfi Javed hits back at BJP leader's police complaint: 'Politicians are making me suicidal, either I...