My brother has always been my hero: Varun Dhawan 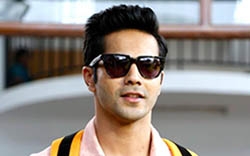 Pratishtha Malhotra in conversation with Varun Dhawan about his hero, films and more…

After debuting with the epitome of glam in the film business, Karan Johar’s ‘Student Of The Year’, Varun Dhawan, who is everyone’s hero, strikes an emotional chord with ‘Main Tera Hero’. This is the first time that his father David Dhawan,who is the King Of Comedy in India, has directed his little boy. 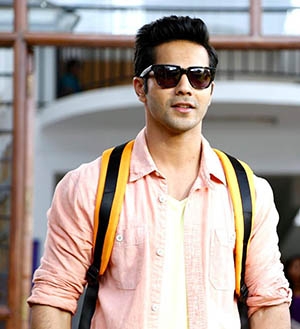 Your brother Rohit is someone you evidently really look up to…

I think because very early in my life when I did my first ad, he was the one who was there and told me how to go about it…How to audition because I had never auditioned! He wanted to be a director, so he told me about things that a director looks for in an actor. When I reached Karan Johar’s office, because Rohit had studied films and was an assistant director himself at that time, he gave me a lot of pointers and tips on how to behave as an assistant director… The things I should do and the things I shouldn’t do…The things that can add value to the project.

When I did ‘Student Of The Year’, the first person I shared my script with was him and he gave me a lot of tips on how to go about it. Whenever I start with anything, the first person I share it with is my elder brother and he always tells me the way to take it forward. Whatever he has, and if I like it, he lets me have it. You know, when my brother started earning money very early in life, I stopped taking money from my parents because he started giving me money. So my pocket money, my elder brother would give me.

I have a really good rapport with my father as well but my brother has always been my hero in life. I have got an amazing equation with my father. For me, it was very difficult to always see my father as a father- type of person because he is a very humorous person and a very unique personality. I think very early in life, I became friends with my father. In fact, he wanted to always keep it like that.

If he was watching a cricket game, he would always want me to sit with him watch the match together, or watch movies together and know my opinion of things I liked and didn’t like. He is my father, so the respect and the equation will be there but more than that, he always tries to be more of a friend and tries to find out what’s happening in my personal life. If my friends are coming home, he would sit with them, chill with them.

My father has never raised his voice or his hand on me as a kid ever. He had never done that. The difficult part when I went on set with him with ‘Main Tera Hero’ was that he is very strict as a director on set! He is a no-nonsense guy. He has a short fuse and if things don’t go the way they are planned, he can lose it and no matter who is on set. There were a lot of times when he screamed at me. We would have a lot of arguments which I think are very important in a sense to give birth to creative thinking.

While your brother went on to follow your father’s footsteps and took to direction, you set foot in mainstream Bollywood as an actor. How did that happen?

I think this happened with watching a lot of films. I used to watch a lot of western stand-up comedy whether it is Jim Carrey, Ben Stiller or Chris Rock on TV, Youtube or DVDs which I got from my cousins. I watched a lot of skits of Johny Lever as well. I used to watch films but I was very intrigued by the performance of people on stage which is a live interaction. I wanted to do that. I didn’t think that I wanted to do films, though. As time progressed and as I grew older and did classes, other things started interesting me and I got interested in drama and a more serious kind of cinema as well. So I think I wanted to explore all of it.

David Dhawan’s cinema has been centred around Govinda, and he happens to be your favourite too.

Oh yeah,totally! I don’t think anyone can replace Salman or Govinda and especially in my dad’s life no one should even try! For me, especially when I got into ‘Main Tera Hero’, I saw the role was for a young boy and that is the way I have played it. There are two gorgeous women in the film, so it is how a boy of my age will react. When I did ‘Student Of The Year’, people did not say that my acting has a flavor of Salman and Govinda but in this film it may happen because the director has worked with these people so much and his style of film making is like that. Maybe that is why you probably will see a similarity.

Back in the day, your father made films like ‘Hero No 1’, ‘Biwi No 1’… and very recently ‘Partner’ was a super blockbuster. There is something timeless about him and his cinema that it works even today…

I think it is because of two things. One is his passion and second is his discipline. He is one of the most punctual people you’ll ever meet in life. He gives you a time of 3 pm and will be there at 2:45. He probably would sit in his car till the time he sees people entering and would then enter.

On set, if we have to shoot a 9 o’clock shift where the ADs are called at 7:30, he would be there at 7… Half an hour before all the ADs at the age of 60! You can’t just have talent and say ‘I am talented and it will happen’. I have learned that from him as he puts in a lot of hard work. He’ll get up half an hour or one hour early, do his shot breakdown.

A lot of times I have seen him do that and many times I have seen this unique thing of doing calculations in the air, which he does a lot of! Probably because he is an editor, so he does his shot breakdown, imagines everything and makes sure he preps everything in that one hour before all the artistes are there. More than being a Dhawan, I think being a fan of his cinema helped me.

Making ‘Main Tera Hero’ is not at all a commercial decision – that my first film has done well, so let’s capitalise on everything and make me a solo hero and have two girls alongside me! It’s not at all like that. Doing this film was a very emotional decision. My father is 60- plus and is not getting any younger.

He has made 43 films; I mean, how much work can he also do? He has done so much. I always wanted to do a film like that…And I think in the last one year his health has not been the best. For the family, this is very scary.

I wouldn’t have dared to do this genre without him. He, on the other hand, has never worked with a newcomer. He is a very commercial filmmaker and would always want to work with an actor who can act. If he feels that this person doesn’t know anything and we would have to make him do it, he wouldn’t waste his time on him, even if it was his son. His temperament is like that, for sure. He would not be able to make a film only! Once he saw ‘Student Of The Year’, he felt that I have some discipline to probably try and do his kind of cinema. He saw some spark or something I guess.

Have you been seduced by stardom yet?

The meaning of the term stardom has changed today. What people had earlier and what stars have today has changed a lot. Everything has changed, from the audience to the media to everything and the mystery about the star is gone. People have so many options today so the stardom the stars of yesteryears had is very, very different from what the stars have today.