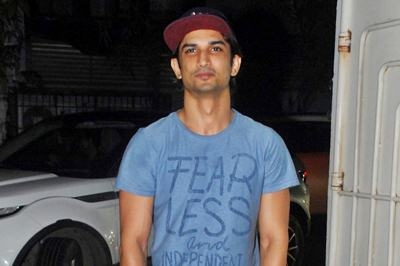 Sushant Singh Rajput who turns 30 on January 21 is the only actor of his generation to have done so little work and yet such a variety of roles in such a short span of time. He began with the role of the Gujju cricketer on Kai Po Che in 2013, and moved to a playing the over-sexed small town boy in Shuddh Desi Romance. After the triumphant performance as Detective Byomkesh Bakshy last year Sushant is now fully into his part as cricketer Mahendra Singh Dhoni in a bio-pic.

How difficult is it for you to portray a living icon Dhoni?
I think for every actor the most challenging part of playing a character; especially a real-life character is to convince yourself that you are the character. The moment you achieve that you are safe. With Byomkesh, my director Dibakar and I had to construct that character out of our imagination. I’ve been a fan of Dhoni for years. I’ve seen him playing for India for ten years or so. My biggest challenge was to convince myself I was Dhoni. Having done that the rest just followed.

You come from a family of cricketers. Did that help?
Yes, actually my sister Mitu is a state-level cricketer. I did have an inclination towards cricket from a very young age. I too was a national-level player. I did think of taking up cricket as a profession when I was in Class 8-9. But it was too much family pressure.

What do you mean?
I was the youngest child and the only son. I was expected to shine in academics. It seemed like too big a risk to take up cricket as a career. I thought I had to live up to my family’s expectations. Not that I didn’t like academics. So I chose to be an engineer. I gave up my dream once. But I wouldn’t let myself give it up a second time.

So cricket’s loss was cinema’s gain?
I hope I am a gain (laughs). And here I am playing Dhoni. It was the great Sunil Gavaskar who had once said, ‘Given a chance I’d like to be in the mind of Dhoni just once to understand what he is thinking.’ I guess I am going where Gavaskar Saab wanted to.

Who is your cricketing idol?
There are many idols. Dhoni is definitely one of them.

How far have your preparations taken you?
As far possible. I am trying to walk on Dhoni’s footprints in the sand, going wherever he has been. I’ve researched him as much as possible, gone wherever he had, stayed in the places that he has. Most importantly his personality has changed. He isn’t same physically or emotionally as he was five years ago. So I’ve to sit down with the man and figure out in various phases of his life.

Would you be imitating Dhoni?
No. But the way he talks, walks, holds the bat, plays in the field…these are very important.

But if you imitate his walk and talk the performance becomes mimicry?
Right, Sir. There is a very thin line dividing characterization from impersonation. I’ve to make sure I don’t cross over into mimicry. Dhoni has millions of fans. When they go to see the film they must not get a visual jerk in the first few frames. There must not be too big a gap between his body language-speech and mine. The moment that is sorted I’ll have the audience with me. Then I can take the character forward in the way I choose to interpret it. I think I’ve done my homework well. I’ll be able to communicate Dhoni’s thought process.

Is it true that you are never bothered with who your co-stars are?
Oh yes, I am too much into my own work, too consumed by my efforts to do my best to do my own.

Do you regret that Shekhar Kapoor’s Paani didn’t happen?
I had prepped really hard for it. I had no reference points for the character. I built it through the imagination. One starts on a clean slate with every character and find a center to it. By the time you do you become a part of that character. Of course you cannot BE the character completely because finally you are just acting.

So how far can you take the quest to be a character?
It all depends on how many hours of practice you put in. I was reading an interview with Kevin Spacey about shooting with Al Pacino. Pacino would remember exactly how many takes he did on the 19th day and how many on the 52nd day. And he would ask the director take, Take 3 from day 19 and Take 7 from day 52. That’s the way to do it. Because the first few takes is just about warming up.

But many actors feel they lose their spontaneity after the first take?
I can’t understand the talk of actors being brilliant one-take actors. If you do only one take you will never what you can do in the second or third take. You can never realize your full potential. I think all actors need to open up their minds.

I agree with you. Most one-take actors are lazy actors?
(Laughs) Maybe. Or maybe they don’t know their potential. All I know is my reaction now can’t be what it is an hour from now.

So you believe the more takes you do the better your grip over a character?
The probability increases for sure.

You come from television? Do you find cinema a better medium?
I gave my best to my TV show Pavitra Rishta. I stayed with the character Manav for 2 and a half years. My girlfriend Ankita stayed with the show for a 5 and a half years. She is even more emotional about the show. Ekta and the serial Pavitra Rishta would always have a very special place in our hearts. Ankita and I met and fell in love because of the show.

Is she more important to you than you are to yourself?
Ankita is the only factor in my life that makes me believe in destiny. How we catch what life throws at us is destiny. Ankita is my destiny.

Were you as passionate about television as you are about cinema?
As long as you’re true to your character I don’t think the size of the screen or the format on camera matters. Even if there is no camera I’d still play Manav and Dhoni exactly the same way. I’d give all of myself on stage. Or even a street play.