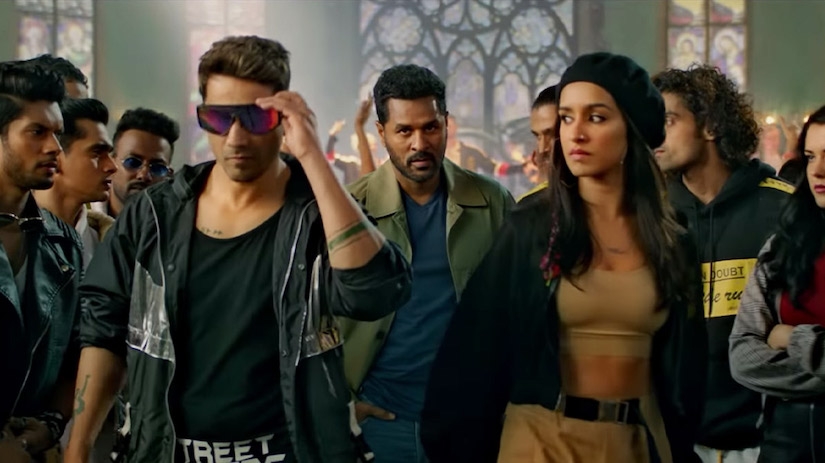 A dance centred film, this Remo D’souza directorial (in 3D) hopes to emulate the success of its Hollywood genre counterparts. But intent does not necessarily assure portent. The story by Remo and screenplay by Tushar Hiranandani and Jagdeep Sidhu does a connect-the-dance-battles narrative in order to arrive at a climactic confrontation – a ground zero battle that plays out like one of the dance reality shows on TV. While the choreography has a high degree of difficulty the dance moves don’t exactly leave much of a lasting visible impact.

Street Dancers is an all Indian-origin group of hip-hop street dancers led by Sahej (Varun Dhawan) while Rule Breakers is a Pakistan-origin one led by Inayat (Shraddha Kapoor).

They engage in elaborate flash mob like street face-offs every time they bump into each other and have a benevolent restaurateur (Prabhudeva) aiding their regular calumny towards each other. Within this threadbare plot, there’s also a half-hearted attempt to speak for illegal Indo-Pak-Sri Lankan immigrants starving for want of recognition and refuge. It doesn’t really feel organic to what transpires here though. Representing a group of second generation immigrants in Britain, most of the cast inexplicable appear to feel ill-at-ease in the Queen’s English but as far as dance is concerned they get the grooves, popping, tutting, locking and various other contemporary moves right. Considering this defect, this film would have been better placed to be set in Nalasopara rather than London.

The 3D effects are a little too obvious and rather inconsequential. The sets are mostly old abandoned European churches and the lighting is a little too extravagant for an underground dance movement. Most of the set-pieces play out like dance videos (post production VFX trickery is obvious) and they appear to be stitched together to segue in ascending order of their degree of difficulty.

There’s not much scope for character depth or performance here. Varun, who has a little more drama in his life (as compared to the rest) continues to play likeable but his dialogue delivery needs a little more range and maturity.

Dancing to the tune of vibrant punjabi hip-hop and mainstream Bollywood remixes Varun, Shraddha, Nora and the entire team make a succulent meal of intricate mixed-dance-form moves but the lack of story to bind the Indo-Pak dance battlefields in London hampers the likability of this enterprise.

All dance and little story makes it a rather wearisome experience. 'Street Dancer' for a cause: Varun Dhawan dancing with cancer survivor kids will brighten up your...