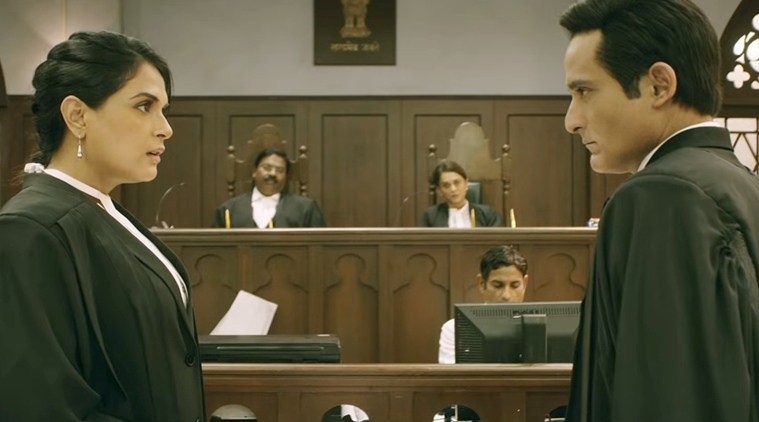 Ajay Bahl’s premier directorial effort B A Pass, which he also wrote and wielded the camera for, attempted to expose the darkly bigoted seamier side of middle class capital city existence. His sophomore effort goes one better. Section 375 hopes to separate perception from reality by reading between the lines of legal procedure, consequent to a rape charge. We have seen many films on rape but none that actually puts forward a realistic, severely tempered, experience like this one.

The film begins quite serenely with Anjali Dangle (Meera Chopra), a junior wardrobe assistant, leaving home, taking a ferry to the mainland where she visits her Director Rohan Ravi Khurrana’s (Rahul Bhat) flat, ostensibly to show him selected outfits for a shoot. And there he rapes her. Or was it aggressive passionate sex? Or another #MeToo exploitation? The camera doesn’t dwell much on that. The next we know is – Anjali has bruises on her face and has filed a rape charge against her director. The understaffed and overworked cops do as much due diligence as possible – or so we believe, the case eventually goes to court and a sentence of 10 years of rigorous imprisonment is read out.

The defendant obviously denies the charge and has his wife rope in reputed lawyer Tarun Saluja (Akshaye Khanna) to go on appeal. It’s now a matter for argument. Public Prosecutor Heeral Gandhi (Richa Chadha) is secure in the knowledge that her case is airtight…and then Tarun strikes… by pinpointing neglected procedural gaps and several loopholes in the victim’s testimony. But does this absolve the defendant?

This is a representative, lifelike courtroom drama, shot with utmost care and concern for presenting different aspects of a case being heard in a courtroom. The effort to convey real-time resonance is appreciable. The lighting is grim and portentous, the expressions on the faces of those in court are grave enough to convey the enormity of the crime. The courtroom arguments are juxtaposed with timely TV grabs of increasing public anger against the defendant and his lawyer and separated by differing views of the home-front of those involved.

The tension increments steadily. Bahl does well to peel off layers from the initial set-up to reveal a picture that suddenly turns ambiguous. While the directorial effort is nuanced and effective, the story, screenplay and dialogues by Manish Gupta, brilliant in flashes, doesn’t quite hit the right notes. ‘Marzi ya Zabardasti’ may be the tagline but too much time and effort is wasted in presenting circumstantial errors in order to cast doubt on the prosecution’s case.

That justice is abstract and Law is supreme, as opined by Tarun Saluja in his opening remarks, is a point well made. Akshaye Khanna’s suave dynamism comes through quite beautifully here. Chadha works up a striking rhythm playing opposing counsel. Meera Chopra looks a little too dazed to make much of a mark though. All-in-all this is a stirring eye opener to the mechanics that go into making of a case!