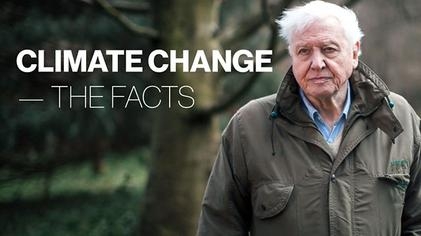 David Attenborough, champion of the earth, fully trust-worthy film-maker and green warrior presents this danger warning on climate change. The clock is ticking but its never too late to alter lifestyles and habits to facilitate a preventive thrust towards retaining green cover and maintaining endangered eco-systems.

This documentary, plucked out from the Our Planet Matters season, is hard-hitting and narrated with a simplicity attuned to all ears.

In the last couple of years, and the intervening months following Greta Thunberg’s damning look at Trump’s retreating back, the talk around global warming and climate change has intensified. There have been diverse and divided opinions being spoken about – from scientists, to environment conservationists, to world leaders, to media. But one thing everyone is clear on is that Climate change has happened and the Earth is experiencing severe changes in temperatures – which has the long-term potential to destroy life itself. Climate Change: The Facts delivers insight into the greatest challenge the human race faces.

Scientists opine that we are just two degrees away from a climate catastrophe. That means that if the rate of global warming continues, our environment would be devastated within 40 years. So we can’t really say we will let our children worry about that...can we? But, are we afraid or doing anything to change that? This film uses dramatic and emotional testimony, to hit where it hurts most. Last year, when Attenborough showed the world (through Blue Planet II) how marine life was being devastated by plastic, there was a concerted effort in Britain and other countries to bring about a significant drop in the use of disposable plastics. Hopefully this clarion call for a greener more earth/environment friendly life will bring about the same effect. (Premiering on Sony BBC Earth on 7th March at 9 pm)