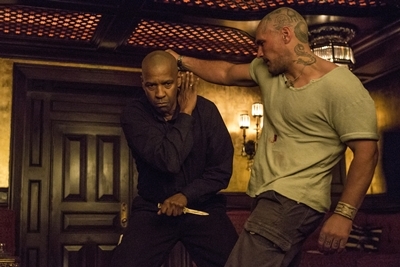 Short of the violence, bloody violence, Denzel Washington’s Equaliser is everything that I would like the US to be. He’s a man of action who reads (Hemingway, Cervantes among others) is caring, compassionate and helpful. He’s also the kind of self-aware guy who confesses he’s not proud of some of things he’s done. But fundamentally, he’s a good guy. And the men he’s fighting are not. Fact is, they’re monsters preying on the weak, ordinary, helpless and innocent.

And as it just happens, in director Antoine Fuqua’s reboot of The Equalizer from the 1980s TV Series, they’re sadistic Russian mobsters while Washington’s widowed grieving character is akin Bruce Willis and Mel Gibson in their action roles and most recently by Keanu Reeves as John Wick. But Washington’s character (and the film under review) is infinitely more interesting and simpatico because he’s driven by justice whereas John Wick is driven by revenge.

The movie opens with a Mark Twain quotation: “The two most important days of your life are the day you were born and the day you find out why.” The expository scenes establishing the central character are quiet and long drawn out.”You look like a Robert, because a Robert reads. You don’t look like a Bob. Bobs watch TV.” The child hooker (played by Chloe Moritz) tells him in their favourite 24 hour diner. “Change your world, you can be anything you want to be,” he says, when she tells him the world is a hard place for exploited people like her. And then, there is explosive action!

Against the backdrop of the most beautiful Russian icons, evil men are killed in inventive ways (one is impaled by a cockscrew; others, later in a warehouse, by nail guns, drills and various other implements. For the Equaliser is a killing machine, a cog in the wheels of commerce: he works in the home improvement mall, a man whose shadowy past becomes clearer as the narrative unfolds in this explosive crime thriller.

Then again, as in Fuqua and Washington’s previous collaboration 2001’s Training Day (when he won the Oscar for Best Actor) the police are corrupt. And politicians are bankrolled by the mobsters. Like Keanu’s John Wick, Robert McCall has telescopic vision that zooms into the microscopic, seeing everything in magnified slow-motion. Motivated as he is by justice, risking his own life to save others, it is disquieting to watch him relish the killings of unjust men, wicked men who are brutal and heartless, men like the psychopathic Teddy (Marton Csokas) who cover their bodies with tattoos of Satan.