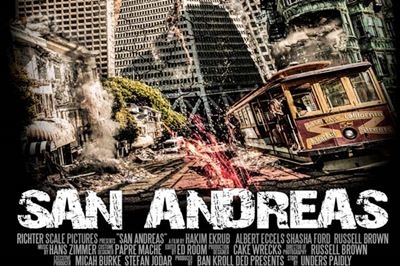 Disaster epic San Andreas opens with an amazing rescue scene in rugged mountainous terrain which sets the tone for what is to follow. I must confess I couldn’t help thinking of poor Nepal as the infamous San Andreas Fault triggered a series of earthquakes in  Los Angeles, San Francisco and elsewhere, concluding with  the largest one in recorded history. At least that’s what Paul Giamatti’s scientist character Lawrence tells TV journo Serena (Archie Punjabi) who follows the search and rescue team led by helicopter pilot Ray Gaines (Dwayne Johnson aka The Rock) and finds herself marooned with the seismologists as hell breaks loose. Sorry. I meant as Nature unleashes its fury on hapless humans. The (CGI 3D) quakes are followed by equally destructive after shocks and storms and a tsunami. The ensuing devastation is heart-rending. Shakespeare said it better than anyone ever could: “As flies to wanton boys are we to the gods.They kill us for their sport.”

Themes of courage, bravery, protecting family and also helping others are neatly woven into the narrative as Ray and his estranged wife Emma (Carla Gugino) join hands to make their way from LA to Frisco to save their only daughter Blake (Daddario ) who was due to start college. Oh, and other people too. In that sense, San Andreas is predictable.

But where director Brad Peyton’s (“Cats & Dogs: The Revenge of Kitty Galore”) scores is in studding the story with characters you can feel for. Take for instance, the Gaines family. Ray and Emma’s marriage ruptured following the accidental death by drowning of a daughter. Then, take the endearing siblings visiting from England, Ben (Hugo Johnstone-Burt) and Ollie (Art Parkinson), while their parents go on a cruise. Peyton also shows us human nature,warts and all. People loot. Others think only of saving their own skin.  But the scientists could have been fleshed out and songstress Kylie Minogue could have been given more to do than just sulk. That said, let me add, San Andreas is a spectacular, thrilling, nail biting epic actioner.