Miley Cyrus, Alicia Keys are ‘The Voice’ coaches for season 11 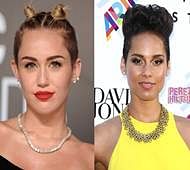 Los Angeles: Singer Miley Cyrus and Alicia Keys are set to join season 11 of “The Voice” as coaches. The two will replace Gwen Stefani and Pharrell Williams, said The Hollywood Reporter.

The singing divas will join returning stars Adam Levine and Blake Shelton, who have been with the series since its inception. While Keys, 35, has previously served as a mentor for Williams’ group of singers during his season-seven debut, Cyrus, 23, will make her Voice debut on season 10, during which she will serve as a key advisor mentoring all four groups of contestants. This will be the first season with two female coaches.

“The musical expertise and energy these two incredibly talented women will bring to the show is remarkable. We’re thrilled that they’ll be joining Adam and Blake in what we know will be a magical 11th season,” Paul Telegdy, president of alternative and late night programming at NBC Entertainment, said in a statement. The 11th season of “The Voice” will air in September.

HomeEntertainmentMiley Cyrus, Alicia Keys are ‘The Voice’ coaches for season 11