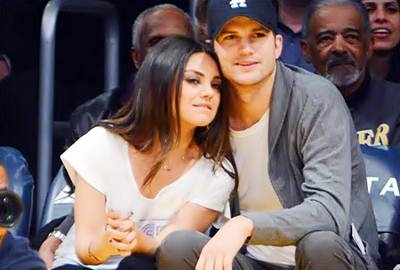 Los Angeles: During a chat show, actress Mila Kunis finally admitted that she and Ashton Kutcher are married. The truth finally came out when the star appeared on James Corden’s new American chat show. Corden wheedled out the answer when he pressed her to show the audience her wedding ring, reports mirror.co.uk

During the interview, Corden asked her about motherhood after giving birth to baby Wyatt in October. Kunis simply answered “Maybe.” He asked: “Either you’re married or you’re not.” Once again she replied saying: “Maybe.” But as he continued asking her, he then demanded she show her wedding finger where there was in fact a ring.

Corden announced: “They are married, look.” Mila looked on a little red-faced, but knew her secret was out. During the ad break, Corden was seen checking he hadn’t offended her but Kunis laughed and said “it’s fine.”

She also admitted she was “thinking about baby number two”, adding that she “loved being pregnant and really loves being a mummy.” Mila added: “Ashton is an amazing father.” In February, Kunis was coy about her nuptials in an interview with Ellen DeGeneres, despite the fact that she and Kutcher sent out a joint Happy New Year message from “The Kutchers”.