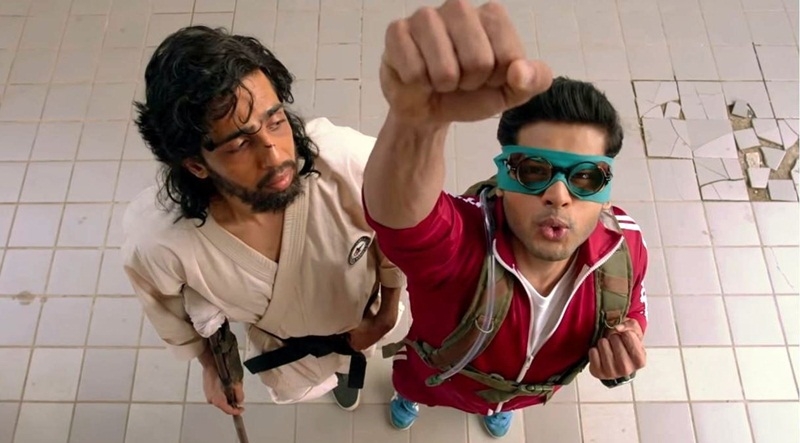 A zany, almost spoofy ode to vintage action pot-boilers of the 70’s, this story of a young man who is born without pain receptors and dreams of becoming a martial arts master, draws on broad comedy and action in Kick-Ass/Deadpool genre-form.

Director Vasan Bala (whose celebrated debut film ‘Peddlers’ never saw the light of cinemas in India) shows off his love for Bollywood pulp cinema in an inspired, resourceful manner that parodies the style and panache of the films top-lining Amitabh Bachchan – ones that he obviously adored in his youth.

This is more homage than mockery, a serenade of ludicrous moments designed to spread out a thick savouring of nostalgia while inveigling the viewer with its splendidly vibrant and largely unadulterated (by modern CGI) cinema tricks. The film basically looks at Bollywood pot boilers and kung-fu moves as an inspirational treasure chest waiting to be found.

Bala opens up his old-school homage action-comedy with a free-for-all high decibel punch-up before cutting back to the past. His action mastery is unshakeable given the well-choreographed (Eric Jacobus and Dennis Ruel) sequences, often illuminated in slow-mo, with a dynamism and effect that keeps the interest gung-ho. The story borrows its ass-kicking teeth from a range of classic action thrillers – be they Bruce Lee, John Woo or our desi Amitabh Bachchan school.

Given that the title comes from the line uttered by Amitabh Bachchan in ‘Mard,’ there’s more of the Patriarchally-challenged ‘Mard’ than ‘Dard’ in this completely infectious, whimsically underlined, crackling entertainer.

Surya (Abhimanyu Dassani) channels the quintessential comic book comedic superhero, given his congenital insensitivity to pain condition – which allows him the freedom to wade into any fight irrespective of the damage caused to self. His childhood shaped by his Grandfather (Mahesh Manjrekar) cultivated passion for kung-fu movies gives him the grounding to idolise a one-legged Karate champion, legend Karate Mani (Gulshan Devaiah) and becomes the reason to showcase his skills in the climactic death match.

We get all this information from Surya himself, a clumsy narrator who gets cheesy and aggrandised about his own life story. He was a geeky misfit given to heroic fantasy and as the story unfolds we are treated to a taste of his own ingenious though incipient nature with events unspooling in melodramatic hype before our eyes.

As a child, Surya enlists his crush, ass-kicking neighbour Supri (Radhika Madan),Mani’s star pupil, into childish crime-fighting antics but it takes a decade for them to get back together and rekindle the flame – whilst also intervening in a seemingly trivial but death-threatening dispute between Mani and his evil twin, Jimmy.

Bala uses energising pop-tunes to colour the experience while Jay Patel’s comic-book styled cinematography adds zest and vibrancy to the vivid presentation. The fights have a simplistic, though, highly effective and increasingly entertaining curve. The humour, in fact, doubles-up if you are invested in the cinema culture of the east.

Abhimanyu Dassani lends a raw, geeky innocence to the revenge-seeking, epoch making ‘mard’ in this picture. Mahesh Manjrekar is highly effective, Radhika Madan lends power and Gulshan Devaiah, Class to this cross-genre parody that is most likely to generate paroxysms than brickbats!