Is Akshay Kumar under pressure because of Bajrangi Bhaijaan and PK 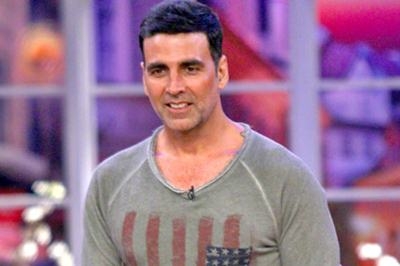 “I do films which are risk based; Baby is a risk based film, movie which doesn’t have any songs, a movie which is there for certain audience, movie which is not like a masala film,” said Akshay Kumar in an interview on being asked if the big business of Bajrangi Bhaijaan and PK puts any sort of pressure on him. He also discusses his strategy of choosing films and the growth of Hindi cinema in various parts of the world, and shares interesting insight about his forthcoming films Airlift and Rustom.

You are one of the biggest commercial stars that we have. Be it Canada, UK, USA, you have a tremendous following. How do you look at the phenomenal growth of Hindi cinema?
Everybody’s film works there, Hindi cinema works everywhere. I am so happy movies are running so well in Australia nowadays, Dubai has become so huge, Pakistan is there. So, all these new new places are opening up. Japan is opening up. So it’s good that we’re growing global.

Some Sikh organizations had some issues with certain things in Singh Is Bliing.
Everything has been sorted.

Brothers, do you think it could have done better since it started off strongly at the Box Office.
It was an average film. I wanted Brothers to be a huge success because the kind of effort that I had put in that film about Martial Arts, MMA, but anyways I don’t lose courage. Sometimes it happens, things don’t work out the way you want them to so here I am with Singh is Bliing.

Bajrangi Bhaijaan and PK have crossed 300 crores. There are other films that have crossed 200 crores. You have a big fan following. Are you under pressure to touch these big numbers?
I do films which are risk based; a Baby is a risk based film, movie which doesn’t have any songs, a movie which is there for certain audience, movie which is not like a masala film. And same way goes with Gabbar which has a message, so there’s certain kind of audience to these kinds of films. I love these kind of films in which I can portray what I want to, how I want to. So that’s how I look at films, I make films in a very certain budget; I myself am the producer of maximum of the movies which I do. So I have a certain budget to it and I make sure nobody loses money in it.

Rustom is something I am looking forward to excitedly because of the amazing chemistry that you have with director Neeraj Pandey. Could you please tell us something about Rustom?
I won’t be able to talk about Rustom yet because of the confidential clause which I’ve in a movie till the movie takes off unless and until you want me to lose my remuneration.

And Airlift, that’s another movie that is keenly anticipated, looking forward to that? That’s looking very interesting. You are paired opposite Nimrat Kaur.
Yeah, that I can talk about, it’s a very simple and real story. When Saddam Hussein attacked Kuwait and lots of Indians had to run along with a lot of other people of various nationalities. So 1,72,000 Indians were running, so they didn’t know where to go and what happened with them, that’s the story about. It’s a real story about the man who gathered all of them and airlifted them from Kuwait to India.