In Pictures! Aamir Khan, Rajkumar Hirani, Ritesh Sidhwani and others meet PM Narendra Modi and this was their request 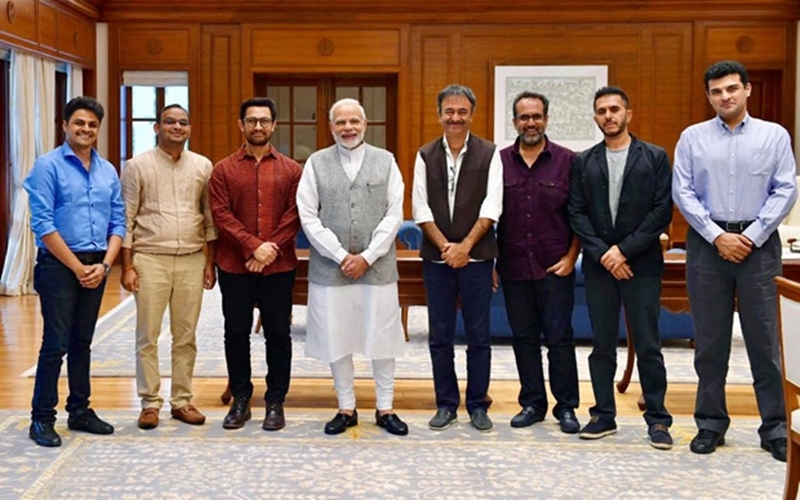 We all know that many actors, filmmakers are of the opinion that India lacks cinema halls, especially in certain zones of rural areas. Keeping in mind the same, some prominent celebrities from the fraternity like hit filmmaker Rajkumar Hirani, superstar Aamir Khan, producer Ritesh Sidhwani amongst others decided to meet our honorable Prime Minister Narendra Modi. Besides them, Siddharth Roy Kapur, Aanand L. Rai, Mahaveer Jain were some others who decided to meet the Prime Minister to discuss about the issues faced by the film industry.

A source reveals, “Bollywood is one of the highest grossing industries of our nation and is also very influential globally. In order to discuss the status of the industry and the day to day issues faced by the people involved in the field, the producers, as well as Aamir Khan, took to the Prime Minister to discuss the same. It was a collaborative effort of all the people involved to come forward and seek solutions from the Prime Minister directly and address these issues.” The source further added, “It turned out to be a very productive and lucrative meeting, Modi Ji himself revealed the fact how in each of his global meetings with delegates from all over the world, Indian cinema is always been discussed and appreciated in depth. He agreed to the fact that Bollywood movies have gained recognition and prominence internationally.“

If reports are to be believed, the meeting that was held recently was a fruitful one with the six filmmakers returning to Mumbai quite satisfied. We hear that the Prime Minister patiently heard out the grievances and matters in hand and at the same time, also agreed to the fact that Indian film industry has made its name in international waters too. “Modi Ji was very receptive throughout and has asserted them, that he will be working towards setting up a special team, appointing someone to look into the specifics of the industry and address them timely,” concluded the source.