The young actor breathes a sigh of relief after getting complimented by veteran actor,
Rishi Kapoor 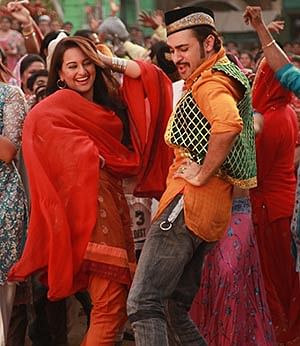 Actor Imran Khan, who has recreated the evergreen number ‘Tayyab Ali’ in ‘Once Upon Ay Time In Mumbai Dobaara!’, is ecstatic after receiving a stamp of approval from veteran star Rishi Kapoor, who had featured in the original song in 1977.
The original number was part of the movie ‘Amar Akbar Anthony’, and in the track`s new version, Imran grooves with Sonakshi Sinha. “The conceptualization of the song ‘Tayyab Ali’ happened because of a shortie in the film who happens to be my friend. His girlfriend’s father refuses his marriage to her daughter. It is at this point of time I have to sing this song. However, the film got completed but the song was not written. Finally director Milan Lutharia and others decided on buying the rights of the original number sung by Rishi Kapoor.” And adds, “I was very nervous when I did this iconic number and while Rishi met me, he complimented me on it. It was gracious enough that he honoured me by saying that I did not have to fear as I had done a good job.”
Defending co-actor Akshay Kumar and that he edits the role of others, he states, “Whosoever has spread the news earlier that Akshay edits the role of others may have been jealous of him. Truly speaking, Akshay is very co- operative. He is the one who designed my entry for the first promotional event in such a mesmerizing manner. I was happy making an entry on the bike. He got me trained and under his guidance, we changed the entry. It is his goodness that he goes out of the way to help his co stars and better the film on the whole.”
When asked whether he harbours any fears of Akshay stealing his thunder, Imran says, “I don’t think Akshay can steal my show if I am working with him. Yes, if I am a bad performer, I lose out. There is no complex in me that sharing the space screen space Akki will steal my limelight.”
“I usually have Friday fears but with this film I am assured. With Ekta Kapoor and Milan Luthria and the whole team I am very confident of it doing well at the box office,” adds the actor about the chances of the film’s success.
Sharing the experience of working with his co-actors, he says, “Sonakshi and Akshay are thorough professionals. They arrive very much on time. They work in tune with the director. Having stardom, they can have a lot of attitude. But Akki is so humble, he sits down on the ground and chats with one and all. He simply wears a ‘chappal’ and moves around on the sets.” And adds, “Working with them is not a challenge for me. But working with Akshay, he has made my work easier. Donning the role for the first time could be a little tough for me. But with his presence, everything went past very easily.”
Venturing into other domains, he says, “Having learnt direction, cinematography and direction from abroad at a later stage I surely will love to do a film based on human relationship and drama. Producing a film or directing is a progression in our field. The rights of Nazir Hussain’s, ‘My maternal grandpa’ are with us. We do not have to buy their rights. However making films under his banner would be very tricky.” And adds, “He has earned a name for himself. I would not like to tamper with it. If at all I direct and produce it will solely be based on my name. Success or failures which I may own through my film will or spoil his name. I do not want any potential damage on his work. It will be wrong on my part to gamble on his hard earned name. Whatever I will believe in I shall make it without hampering his reputation.”