After 10 years of predicting it on Twitter, Demi Lovato's dream of singing the national anthem at the Super Bowl came true on Sunday.
FPJ Web Desk 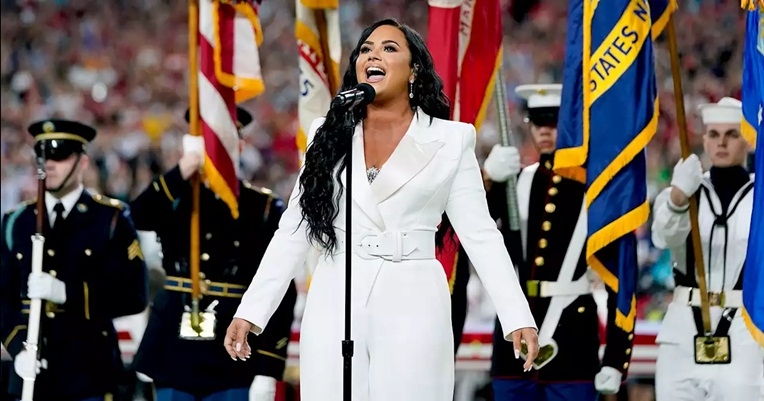 After 10 years of predicting it on Twitter, Demi Lovato's dream of singing the national anthem at the Super Bowl came true on Sunday.

Two Latinas, Jennifer Lopez and Shakira, set the stage on fire at the grand event in Miami. The two artists, who are known to give stunning stage performances, put together charismatic performances as they took the stage at Super Bowl Halftime Show 2020 at Hard Rock Stadium in Miami Gardens.

Another highlight of the Super Bowl Halftime Show 2020 was Demi Lovato singing the national anthem. Demi made a rousing return to the music scene at the 2020 Grammy Awards with her first live performance since her highly-publicised drug overdose and hospitalisation in July 2018.. The singer's comeback continued with SBL and she once again gave the audience goosebumps with her vocals.

However, did you know, Demi had predicted nearly 10 years ago that she will perform at the Super Bowl? The 'Sorry Not Sorry' singer's tweet from 10 years ago is going viral on the internet. In the tweet, Demi had predicted that she will one day perform at SBL. The tweet reads, "One day, I'm gonna sing the national anthem at a super bowl. Onnnee dayyy...."

Yes, the singer quite literally spoke into existence! Fans were quick to take to the comments section and congratulate Demi for accomplishing her decade-old dream. A fan wrote, "You were by Far the best singer during the Super BowlCongrats on absolutely nailing the national anthem."

You spoke it into existence and you did a phenomenal job! 🇺🇸

You brought tears to my eyes singing the National Anthem!🇺🇸 So effortless & So Beautiful~ Congratulations!! 🇺🇸🇺🇸🇺🇸🇺🇸🇺🇸🇺🇸❤️❤️❤️❤️ Earlier this month, the 27-year-old singer, who debuted her new song "Anyone" at the 62nd annual music awards ceremony, received a standing ovation from the audience.

According to Entertainment Weekly, when she was recuperating in the hospital, Lovato is said to have decided the track would be the first song she would sing after recovery.

The singer was introduced on stage by "Little Women" director Greta Gerwig and accompanied only by a pianist on stage.