Mariah Carey just said that she is "starting a band" with none other than the power couple Nick Jonas and Priyanka Chopra.
ANI 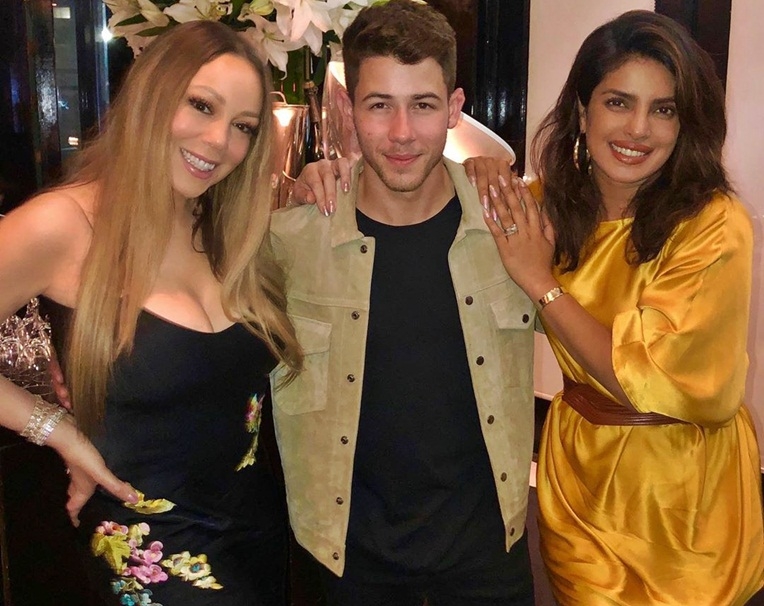 Washington D.C.: Ready for an epic collaboration? American singer-songwriter Mariah Carey just said that she is "starting a band" with none other than the power couple Nick Jonas and Priyanka Chopra.

Well, don't get too excited, the songstress is just toying with us! The pop icon recently met Nick and Priyanka and shared an adorable picture with the couple, writing, "Starting a band... Lol."

Carey's comment will surely have their fans yearning for a Mariah Carey and Jonas Brothers collaboration. Jonas Brothers - Nick, Joe, and Kevin recently reunited and have since dropped back to back hit songs and album.

In the still, Carey can be seen wearing a long black dress with some floral embroidery, while the 'Quantico' star opted for a dazzling satin yellow dress with a brown belt around her waist. Nick standing in between the two women, wore an all-black outfit topped off with suede boots and a green jacket.

This isn't the first time that a celebrity has teased a collaboration with the Jonas Brothers. Earlier this week, Lil Nas X promised Joe that he could join him for a remix of his song 'Panini'.

After the MTV VMAs on Monday, Joe posted a photo with the 'Old Town Road' singer, making a joke about the various versions of the radio hit with the comment, "My old town road remix never made the cut." Nas X quickly assuaged the 'Sucker' singer by tweeting back, "imma let u on panini don't worry." Nick, Joe, and Kevin took home Moon Man trophies at the MTV VMAs on Monday for winning the best pop category for their 'Sucker' music video, which features their three wives, Priyanka, Sophie Turner, and Danielle Jonas, respectively.

Nas X also bagged the song of the year award after being nominated in eight categories.

The JoBros also performed at the famed Stone Pony stage in Asbury Park, New Jersey the night before the MTV VMAs, and will rock the stage on Friday at Madison Square Garden as part of their 'Happiness Begins' tour.

Meanwhile, Carey is gearing up for a five-night stand of her Christmas concert series All I Want for Christmas Is You at Las Vegas' Colosseum at Caesars Palace in the late November. The singer has also recorded a new theme song for the ABC Black-ish spinoff, titled 'Mixed-ish'.

'Mixed-ish' is scheduled to premiere on September 24 on ABC. The show focuses on the 1980s upbringing of Tracee Ellis Ross' character, Rainbow. It features Arica Himmel as young Rainbow and Mark-Paul Gosselaar and Tika Sumpter as her parents.