Inside Pictures: Paris Hilton stuns in gorgeous dresses on wedding day and reception 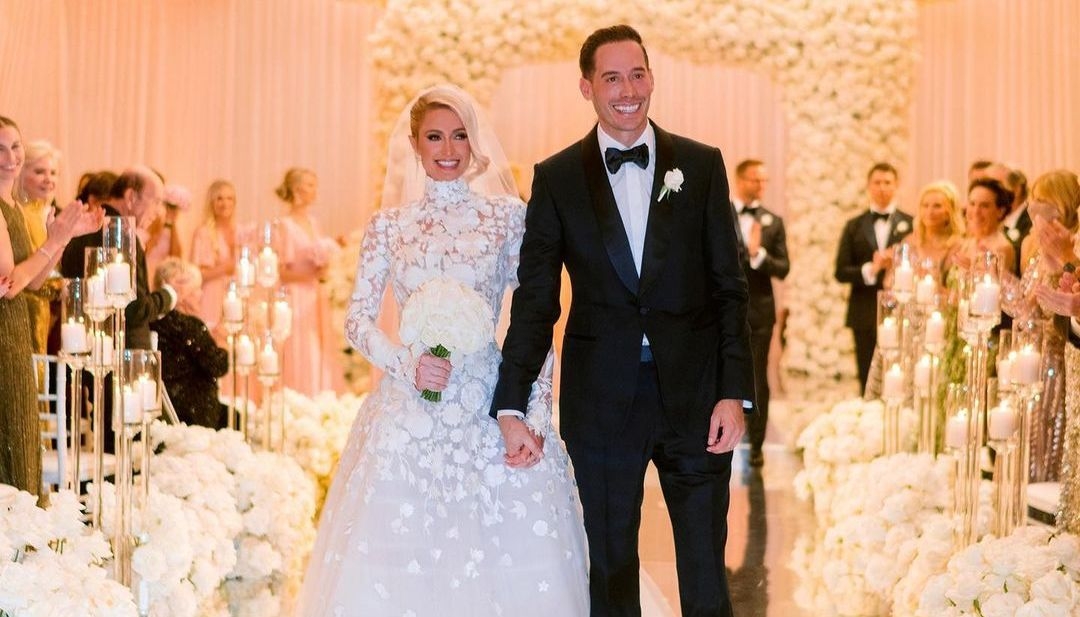 Washington [US]: It's official, Paris Hilton is a married woman now! The reality TV star married her entrepreneur beau Carter Reum in a celeb-studded ceremony at her late grandfather's sprawling Bel-Air estate.

The setup for the aisle was immaculate with thousands of white roses lining the aisles and a white rose arch over the couple as they exchanged vows.

Carter Reum, who donned a navy blue classic tuxedo by Zegna with a white rose pinned at the coat's collar, couldn't hold back his tears as his stunning bride walked down the aisle in an exquisite custom Oscar de la Renta dress.

"I love how it turned out. I wanted something that was timeless, elegant, chic, and iconic, and I am so happy," Page Six quoted Paris telling Vogue of her bridal style.

The star was earlier rumoured to walk down the aisle in Valentino like her sister Nicky Hilton Rothschild, however, the style she ended up selecting had tons of similarities to her Nicky's wedding dress, which featured similarly sheer sleeves.

Paris wore in total four different dresses over the course of her wedding day.

As per Page Six, for her first dance with her husband Carter, Paris changed into an off-the-shoulder Ghalia Lav style with a corset top and a sweetheart neckline. She accentuated the look by sporting a sparkling crown on her hair.

For the third dress, Paris chose to sport a crystal-covered custom Pamella Roland style, as per Page Six. Her picture while posing for photos with singer Demi Lovato, who performed 'I Will Always Love You', is doing the rounds on the internet.

According to Page Six, Paris wore precious jewellery for her wedding including her dazzling diamond ring from Carter.

Carter Reum stuck to one style throughout the night, as Paris previously predicted at Jimmy Fallon show in August.

"I love outfit changes, Reum is not as high maintenance as I am," she said at the show as per Page Six.

In a post-wedding blog post, Paris documented the after-party celebrations with her husband and called it "our version of a ball".

"The reception was everything I wanted... chic, cute and fun," she wrote of the star-studded ceremony which was attended by celebrities including Paula Abdul, Emma Roberts, Bebe Rexha and Kim Kardashian.

The beauty mogul Kim Kardashian was also the talk of the town due to her body-fitted outfit after Paris' wedding pictures went viral. Kim sported a black strapless Balenciaga dress for the occasion.

Speaking of Paris' bridesmaids, including Rothschild, who served as maid of honour, wore custom pink Alice plus Olivia dresses.

Alice plus Olivia label's CEO and creative director, Stacy Bendet, was also among the wedding guests.

Paris and Carter have been together since late 2019. On February 17, 2021, Paris took to Twitter on her 40th birthday to share that they were engaged. Carter proposed the star with a custom emerald-cut engagement ring, as per Page Six.

"When you find your soulmate, you don't just know it. You feel it," she tweeted alongside a video slideshow of images from the proposal.

"This weekend, Carter dropped to one knee and I said yes, yes to forever. There's no one I'd rather spend forever with," she continued.

According to her website, where she posted more photos from the big proposal, Carter shocked the reality TV star during a pre-dinner walk on the beach.

"It was the kind of proposal I had always dreamed of, followed by a special celebration with family and close friends," she wrote.