Hollywood star Hugh Jackman on Sunday gave an update about his skin biopsy, which he recently underwent for a possible cancer scare, saying that the result came back "inconclusive".
PTI 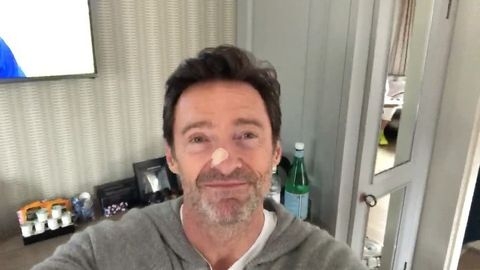 Hollywood star Hugh Jackman on Sunday gave an update about his skin biopsy, which he recently underwent for a possible cancer scare, saying that the result came back "inconclusive".

The 52-year-old actor, who has a history of skin cancer on his nose, shared a post on Instagram and said he will go in for a recheck after he is done shooting in around two months.

"Update on my biopsy: It's comeback 'inconclusive'. This means they didn't take enough. That said, the worst it can be is a Basel Cell Carcinoma (BCC). So when I'm done filming, I'll have it rechecked," Jackman wrote alongside a short video clip.

The Australian actor, internationally known for playing the mutant Wolverine in "X-Men" films, has been treated for basal cell carcinoma, the least dangerous of skin cancers, five times. He last underwent treatment for the same in 2017.

In the video, Jackman said his doctors "are not that worried" about his condition.

He also reiterated his advice for his fans and followers to get regular skin tests and wear sunscreen.

The Golden Globe winner also expressed gratitude towards well wishers for their support.

"I'm seeing your comments and stories. If by posting about this I remind one person to go see their dermatologist - I'm happy," he concluded the post.

Jackman is currently preparing for the Broadway revival of "The Music Man", which is opening later this year.

He is also set to star in upcoming sci-fi movie "Reminiscence" for Warner Bros. Also featuring Rebecca Ferguson and Thandiwe Newton, the film will release in the US on August 20.