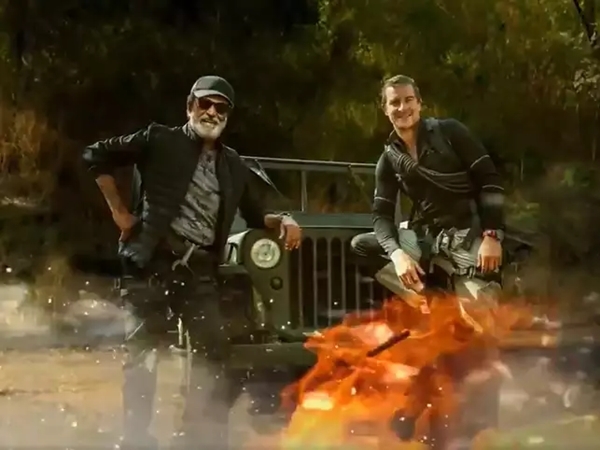 Washington D.C.: British adventurer Bear Grylls on Wednesday shared an intriguing motion poster marking superstar Rajinikanth's blockbuster TV debut in Discovery's 'Into the Wild'. Grylls also shared that it was a special experience for him to work with the Padma Vibhushan awardee.

The 45-year-old adventurer shared the motion poster on Twitter where Grylls is seen posing along with Rajinikanth on the bonnet of a jeep in the woods while they both smile looking at the camera.

While sharing the motion poster, Grylls tweeted, "Preparing for @Rajinikanth's blockbuster TV debut with an Into The Wild with Bear Grylls motion poster! I have worked with many stars around the world but this one for me was special.

Preparing for @Rajinikanth’s blockbuster TV debut with an Into The Wild with Bear Grylls motion poster! I have worked with many stars around the world but this one for me was special. Love India. #ThalaivaOnDiscovery pic.twitter.com/kFnkiw71S6

Love India. #ThalaivaOnDiscovery." In the next Tweet, the survival instructor also shared that 'Thalaiva' has always been a star with swagger, but everything was different in the wild.

He stated that it was fun to spend time with the legendary actor and throughout the shoot for the special episode, he got to know Rajinikanth in a totally new way. After Rajinikanth, Deepika and Virat to feature on Bear Grylls' 'Man Vs Wild'

Earlier in January, Rajinikanth suffered minor injuries while shooting for the special episode of 'Man vs Wild' Bandipur forest in Karnataka.

The episode with Prime Minister Modi was aired last year in August and became quite an attraction among viewers.