Beyonce gets spot amongst British Royals at Madame Tussauds

It's time to bow down as 'Queen Bey' is here to claim her throne!
ANI 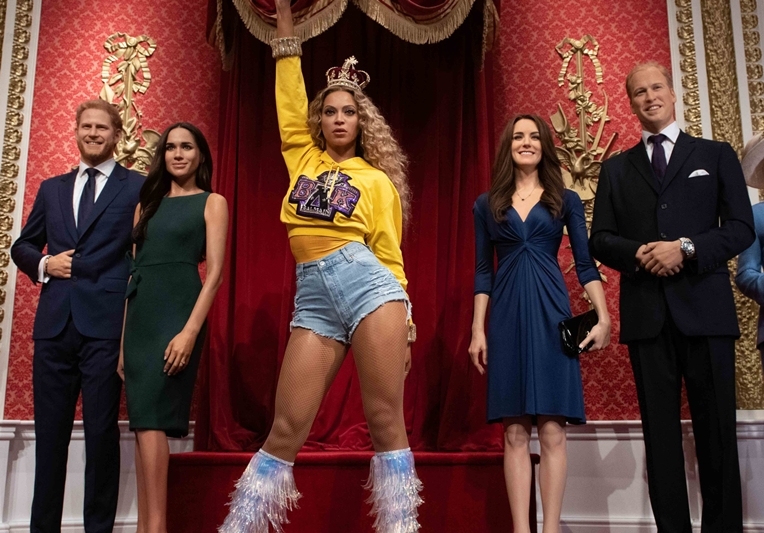 Washington D.C.: It's time to bow down as 'Queen Bey' is here to claim her throne! Madame Tussauds London on Thursday unveiled Beyonce's wax figurine standing amidst the British Royals.

The singer's statue has been placed at Queen Elizabeth II's spot for a day where she is covered by the Duke and Duchess of Sussex, Prince Harry and Meghan Markle and Prince Philip to the right while Kate Middleton, Prince William, Prince Charles and Camila Parker Bowles are seen standing to her left.

On Friday, her statue will be replaced with the Queen's and she will join the figures of her likes including Ed Sheeran, Adele, Rihanna.

"Beyonce is a living legend, rightly crowned Queen Bey by her legions of fans and industry insiders. If anyone is fitting of a claim to The Queen's spot in our attraction for the very first time, it's Beyonce," Entertainment Weekly quoted Steve Davies, general manager at Madame Tussauds London as saying.

It's time to bow down to THE QUEEN 👑 🐝 pic.twitter.com/kl6DLUfLaY

"HRH Queen Elizabeth II is famous for her mischievous sense of humour and we think a wry smile will cross her face when she sees that music royalty has temporarily filled her shoes," he explained.

The official Instagram handle of Tussauds London shared the pictures and wrote, "Take your throne, Queen Bey." The statue's styling is inspired by Beyonce's 2019 Coachella outfit where she donned a yellow Balmain hoodie with a pair of denim shorts and fringy knee-length boots.