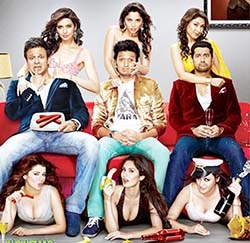 New Delhi: The Centre and censor board today told Delhi High Court that Bollywood movie Grand Masti underwent 218 cuts and has been re-certified for unrestricted public exhibition. The submission was made in an affidavit filed on behalf of the Union government and Central Board of Film Certification (CBFC) before a bench of Chief Justice G Rohiniand Justice Jayant Nath which was hearing a PIL seeking a stay on exhibition of the movie on TV.

The court is also hearing an application filed by a media group seeking permission to air the movie on one of their channels as the high court had on August 21 stayed its telecast on TV. The bench today reserved its verdict after going through the affidavit and the arguments on behalf of the government, CBFC, media network and the petitioner Edara Gopi Chand.

In the joint affidavit, filed through central government standing counsel Vivek Goyal, CBFC has said that the movie was re-certified as U/A in January this year after undergoing 218 cuts which reduced the 135 minute long theatrical version of the film to 98 minutes.

“The applicant of the film Grand Masti (while seeking re-certification) had submitted 217 voluntary cuts which contained all double meaning, vulgar, obscene visuals and dialogues, derogatory or degrading women in any manner.

“After carefully examining the film the committee felt that the film is now suitable for ‘U/A’ category audience. The conversion was done as per the practice which was done for other movies also having ‘A’ certificate,” CBFC has said in its affidavit, while seeking dismissal of the petition.

The 218th cut was made by the Board prior to certification of the film, Goyal told the court. The media group in its plea seeking removal of the stay on telecast of the movie has said it has suffered financial loss due to the restriction.

It has also said that it had purchased the telecast rights of the movie for Rs four crore and also invested a substantial amount on the advertisement of the film. The court had on August 21 stayed the television premier of the movie saying it was not certified for unrestricted public exhibition and cannot be televised under the Cable Network Regulation Act.

“Grand Masti”, also referred to as “Masti 2”, is Bollywood adult-comedy directed by Indra Kumar and produced by Ashok Thakeria.