The producer right from her latest project, shares her take on films and faith 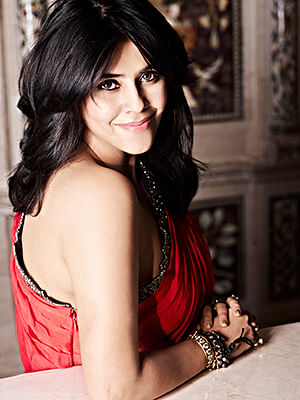 Ekta Kapoor is leaving no stone unturned for her next production, ‘Once Upon Ay Time In Mumbai Dobaara!’ (OUATIMD) that will be releasing on August 15. But despite being born with a silver spoon, she confesses that she has consciously had to work really hard to make her mark as a producer. She spills her ‘mantra’ for success.

“Yes, I make sexy, bold as well as real films. What is more important for me is to get great scripts. Also I am honored to be working with good directors well as great cast. Intriguing stories do matter a lot to a great extent in making a film successful. Also, I always care for all my films to have no similarities to the films I may have produced,” says Ekta and citing examples she adds, “‘The Dirty Picture’, ‘Shor’ and other films of mine once made, I do not like to get going with the same kind of story line. My conscious effort to keep my real films as fictitious makes a lot of difference. I like to respect real life of anyone without crossing the limits which might show them in bad light. Without an iota of doubt my films are colorful, having a lot of entertainment value. ”
Despite belonging from the film industry, she shares that she has had to face her own set of challenges. “Also I will like to clarify that yes, I am blessed with all this, but I do have to work harder to get close to success. At times on certain films, I may have gone into financial losses but then all is fair in our profession. I do not like to leave any stone unturned while I produce serials and films merely because everything is on schedule,” she shares.
When asked to give few tips, she humbly replies, “As a producer, I am no one to give tips to the other fellow producers, indeed, I am still a learner. In fact, I would love to learn the intricacies of film making from so many great and senior producers.”
Spilling the secret why director Milind Lutharia is her mom’s favourite, she shares, “Milind is loved by my mom because he is an economical director who gives much entertainment in less price. ”
Talking about her superstitious ways, Ekta shares her faith, “I love to visit Ajmer Sharif’s Dargha because I have a lot of belief in him. Whenever I visit the Dargha, I can feel his presence. I am going to visit the Dargha with my whole cast and crew .Yes, I do believe in Hindu Gods as well. In fact, I believe in some omnipresent power that extends all the energies, calmness to our soul. All we have to do is have a strong belief in the power that energizes our moments, particularly when we are thinking about him.”
Talking about the apt release date of her upcoming film, she shares, ” ‘OUATIMD’ releases on August 15 as this day is most suited day for the release of our film. On this day some of our leaders fought hard to get us free from the clutches of the British rule. We need to feel free on this day. All we need to do is live our parts with utmost truth so as not to spoil the freedom which we have got after their sincere struggle. I am very true to the theme and so releasing ‘OUATIMD’ on this day happens to be the best day for me and my crew.”