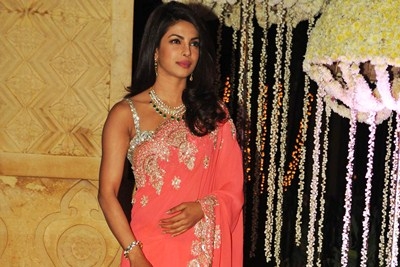 Calling her “charismatic” and an “arresting lead”, Bollywood actress Priyanka Chopra’s debut on American TV as a young FBI recruit Alex Parrish on “Quantico” has been lauded by television critics.

The much-awaited ABC TV drama premiered in the US on Sunday. The first episode of “Quantico” will air in India on October 3. The New York Times praised Chopra as the “strongest human asset in Quantico”.

“Ms Chopra, a Bollywood superstar and former Miss World is immediately charismatic and commanding amid the otherwise generic ensemble. If there is a problem with her casting, it is that she may come across as too seasoned and assured to be persuasive as a shaky, neophyte recruit.”

Variety said, “With an arresting lead in Priyanka Chopra, a former Miss World who was born in India, the show races through a lot of material very quickly, which makes it difficult to get a firm handle on where all of this might settle.”

The Wrap called Chopra as someone having “a poise and sexual spark as Alex that suggests a formidable potential FBI agent whose mind and beauty are equally stunning”.

Even fans of the 33-year-old actress took to Twitter to appreciate her latest international stint. “@priyankachopra Next big star,” a fan said. Another added, “Cool seeing it say “Starring Priyanka Chopra.”

The news is abuzz with Priyanka Chopra’s upcoming international show Quantico which premiered just a few hours back! Many of you must wonder how the Bollywood superstar landed the envious deal with America’s biggest television studio!

Well she didn’t slip through the crack obviously but she didn’t get the lead role in Quantico “the traditional way” either. In a quick chat with us PC revealed, “For me, it was very different. Most actors audition for a lot of shows. But for me, I had done a special deal with ABC, they scout talent around the world. So, when Kelly Lee, who is in casting, came down, I was shooting Gunday. She said they wanted to do a development deal where they find the right show for me. They had done similar deals with Sofia Vergara, Eva Longoria and a few other actresses, where they find the right show for that talent. So then I had to go to LA and read the 25 pilots that they had picked for me, tell them the ones I liked, which was around three or four scripts. If it ends up working for everyone from writers, directors and the creative team, you end up doing it. So I am happy that I got my first pick which was Quantico!”