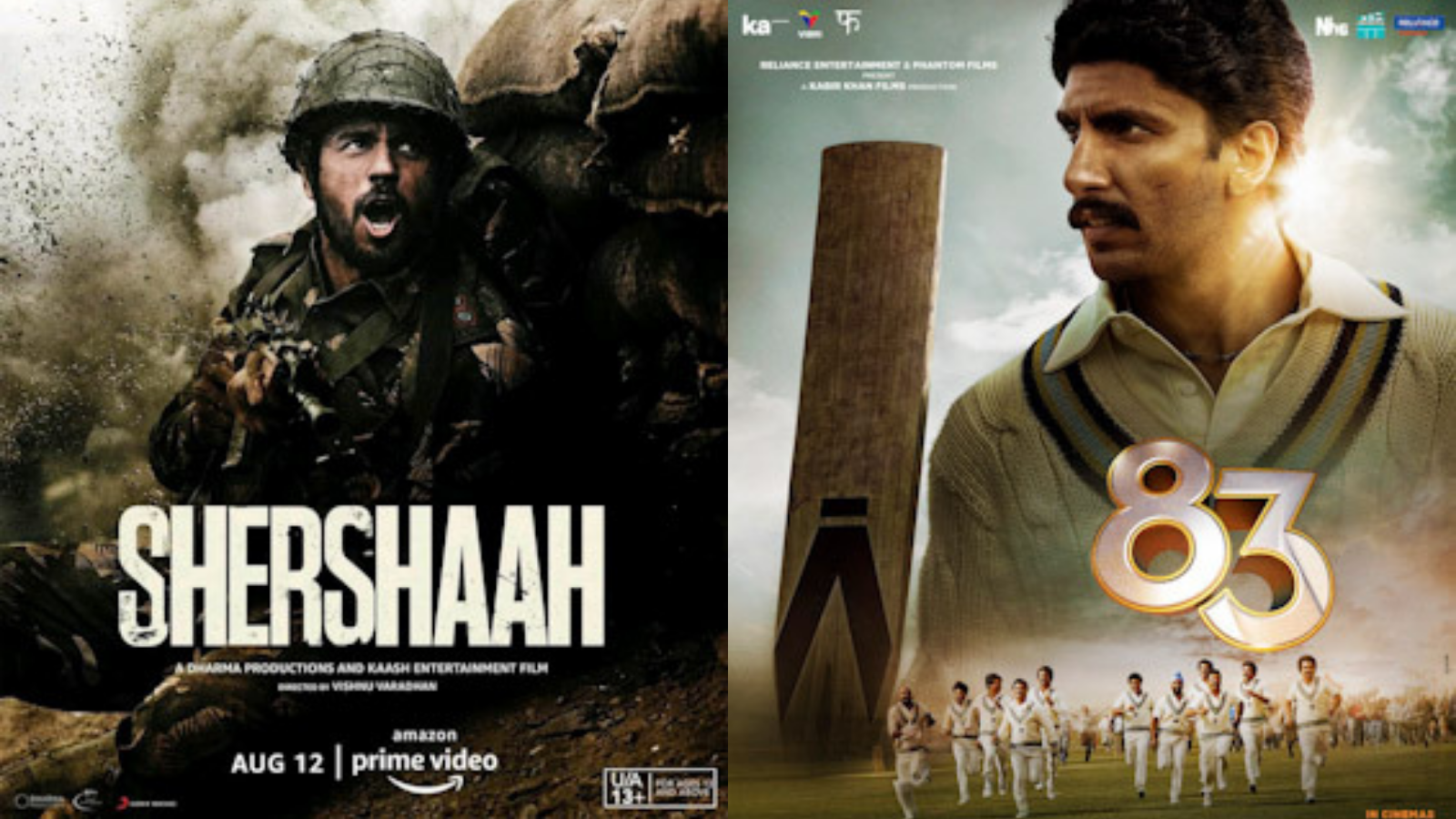 In 2021, Bollywood experienced numbness due to the COVID-19 lockdown. As theatres were shut, several filmmakers opted for the OTT release. It was only after the government of Maharashtra announced the opening of cinema halls on October 22, 2021, that theatrical release announcements for some of the most anticipated, big-budget Bollywood films started to roll in one after another.

While the rest of the country had already opened theaters earlier in 2021, some at full capacity, Maharashtra allowed a half-capacity opening, noting the substantial decline in COVID-19 spread across the country.

Vikram Batra, a young man, dreams of becoming a soldier and falls in love with Dimple. Soon after his training, he climbs the military ranks and contributes to India's victory in the Kargil war. The movie features Sidharth Malhotra and Kiara Advani. On August 31, 2021, Amazon stated that 'Shershaah' become the most-watched Indian film on the platform.

The life of Sardar Udham Singh, a revolutionary freedom fighter best known for assassinating Michael O'Dwyer in London to take revenge for 1919 Jallianwala Bagh massacre in Amritsar. Vicky Kaushal plays the lead in the movie. The film was also shortlisted among with 14 other films for the Indian submissions for Best Foreign Film category at the 94th Academy Awards, but was not selected.

Harbouring big dreams but not the means to achieve them, a woman reluctantly agrees to become a surrogate for a couple. However, when problems begin to crop up, she must face some tough decisions. The movie features Kriti Sanon and Pankaj Tripathi. It received mixed reviews from the film critics, who praised Sanon and Tripathi's performances, with many stating the role as the best performance of Sanon but criticised the film for its contrived plot.

When a cynical ex-TV news anchor gets an alarming call on his radio show, he sees a chance for a career comeback -- but it may cost him his conscience. The movie features Kartik Aaryan and Mrunal Thakur in the leading roles. The film received mixed reviews from critics, while praising Aaryan's performance and Madhvani's direction, they pointed out the cliched plot and dialogues.

A forest officer is tasked with capturing and containing a man-eating tigress in a remote village. However, she faces hostility from various sides as she tries to do her job. Vidya Balan plays the lead in the movie. 'Sherni' received positive reviews from the film critics for raising awareness about the importance of wildlife conservation and Balan's performance.

The film follows Jayalalithaa's inspiring journey as she arrives as a young actress in the Tamil film industry. She reaches superstar status and eventually becomes Thalaivi- a powerful figure in the world of politics. Kangana Ranaut plays the lead in the movie. The film received mixed response to release, film critics called the screenplay as half-baked and over-dramatic while the others praised Kangana and Swamy's strong performances.

Manu, a bodybuilder from Chandigarh, falls in love with Maanvi, a Zumba teacher. All seems well until a revelation causes turmoil in their love story. The movie features Ayushman Khuranna and Vaani Kapoor in lead roles. It was theatrically released on December 10, 2021, to positive reviews.

A woman suspected of killing her husband narrates an interesting story about her marriage while investigating police officers look for clues to arrest her. The movie features Taapsee Pannu, Vikrant Massey and Harshvardhan Rane in lead roles. The film draws inspiration from Roald Dahl's infamous short story, 'Lamb to the Slaughter'. Upon release, 'Haseen Dilruba' received mixed reviews from the film critics.

Widowed soon after marriage, a young woman contends with an inability to grieve, quirky relatives, and a startling discovery about her late husband. Sanya Malhotra plays the lead role in this movie. Certain audiences noted that the film had similarities with Seema Pahwa's directorial debut 'Ramprasad Ki Tehrvi'.