In an Instagram Reel, Shehnaaz is seen having fun with her co-stars Diljit Dosanjh and Sonam Bajwa.
FPJ Web Desk 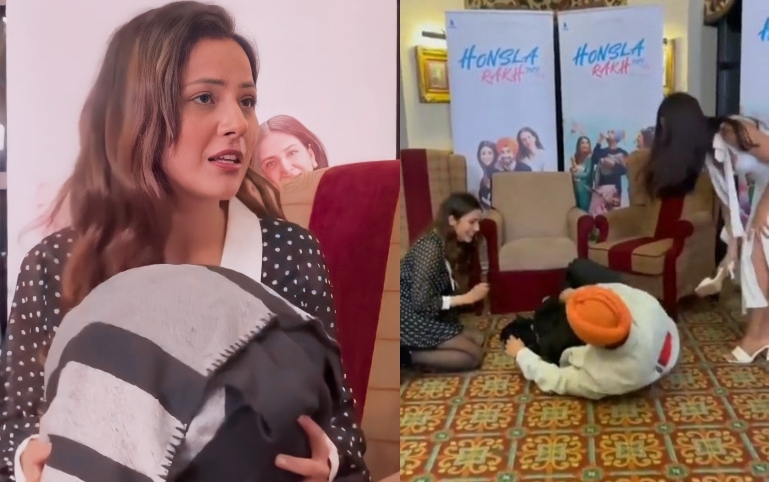 Actress Shehnaaz Gill, who has stayed away from the public eye since the tragic death of her rumoured boyfriend Sidharth Shukla, recently made her first appearance for the promotions of her upcoming film 'Honsla Rakh'. In an Instagram Reel, Shehnaaz is seen having fun with her co-stars Diljit Dosanjh and Sonam Bajwa.

In the video shared by Diljit, the trio is seen lip-syncing to the lines from the film's trailer.

"Excuse me, sir. Please calm your baby down. Because of your baby, my baby's romance is getting ruined," Diljit says in Punjabi. He is seen sitting with Sonam, holding her hand. Seconds later, Shehnaaz enters the room with a stuff toy, calling it her baby. She says, "I loved him and he did this to me."

Both the ladies are then seen beating him up. The video also shows Shehnaaz losing her balance.

Several users took to the comments section to react to the video and showered love on Shehnaaz.

A user wrote, "After soo long... happy to see Shehnaaz."

"She's hiding her tears to make us happy," commented another.

A netizen said, "Shehnaaz so so nice to see u back plz smile and stay happy."

'Honsla Rakh' revolves around the ups and down in the parenting journey of a single father (Diljit), filled with hilarious episodes, and his attempt to find love again (played by Sonam), only to have his ex (Shehnaaz) return in his life.

The film is all set to release worldwide on October 15.