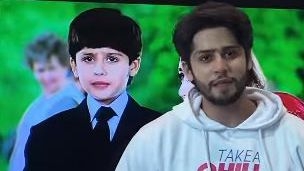 It's been 20 years since the iconic movie 'Kabhi Khushi Kabhie Gham' was released. And to mark the occasion, celebrities and fans have been sharing videos recreating moments from the movie on social media.

Recently, actor Jibraan Khan, who played Shah Rukh Khan and Kajol's son in the second half of 'K3G', celebrated 20 years of the film by posting a video on Instagram.

In the video, he is seen recreating a scene which also features SRK.

Jibraan captioned the video, “Agar zindagi mein kuch haasil karna ho, kuch paana ho....toh always go back and re-watch #K3G (If you want to gain something in life then go back and re-watch K3G). This film is where I fell in love with the camera & thank you to @karanjohar and the entire cast and crew for letting this lil Krish have such a 'chill pill' time on set!”

Jibraan mouthed his lines in front of a TV screen that played the scene from the film.

On Monday, actor Alia Bhatt also shared a video on Instagram, in which she was seen enacting Kareena Kapoor's character Poo from the film.