Actress Neha Dhupia and Angad Bedi, who recently spoke about protecting their daughter Mehr's privacy by not sharing her face on social media, were captured by the paparazzi on Wednesday. The family was seen at Foodhall, Mumbai.
FPJ Web Desk 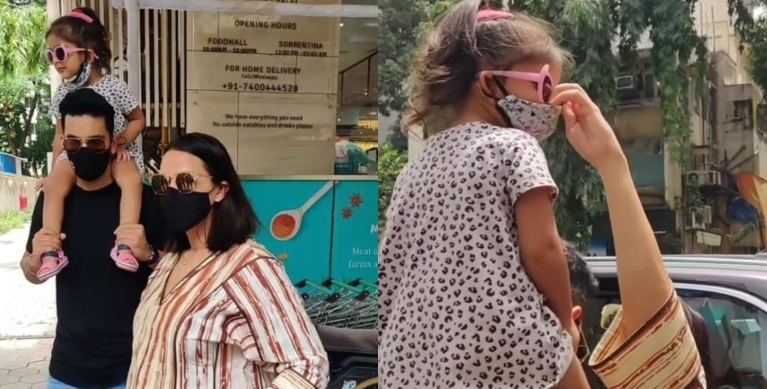 Actress Neha Dhupia and Angad Bedi, who recently spoke about protecting their daughter Mehr's privacy by not sharing her face on social media, were captured by the paparazzi on Wednesday. The family was seen at Foodhall, Mumbai.

A video, shared by a paparazzo on Instagram, shows Angad and Neha walking towards their car as Mehr sits on her father's shoulders. Mehr is seen wearing her mask on her chin and her face is clearly visible in the video. The clip shows Neha rushing towards her daughter to cover her face after realising that she is being photographed by paparazzi.

During a recent Instagram Live session, a fan asked the star couple why they don't show their daughter Mehr's face on social media.

To this, Angad replied, "There’s a reason for that. It's because she is too young. When she grows up, she can make that choice for herself." Neha Dhupia and Angad Bedi are all set to embrace parenthood once again.

On Sunday, the two took to their respective Instagram handles and announced that they are expecting their second child.

Along with it, they shared a family picture, wherein Neha can be seen flaunting her baby bump. Angad and his daughter Mehr are also featured in the image.

Neha revealed that they did a lot of brainstorming on how to announce the news of her pregnancy on social media.

"Took us 2 days to come with a caption. The best one we could think of was.. Thank you, God," Neha wrote on her Instagram account.