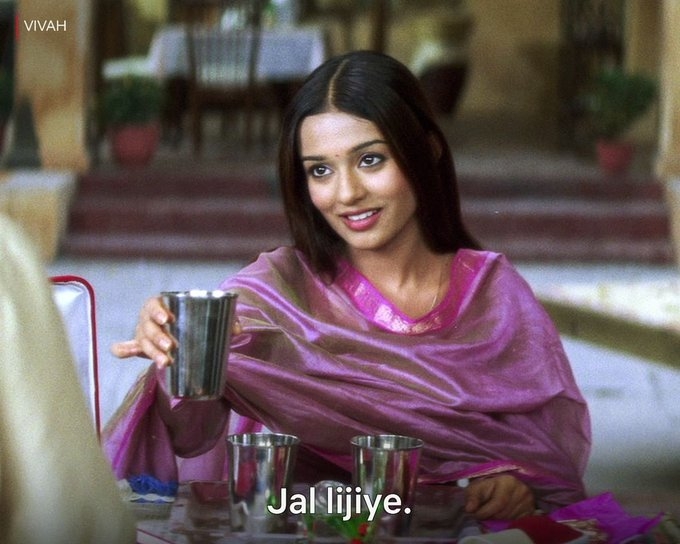 Bollywood actress Amrita Rao on Sunday reacted to the viral memes inspired by 'Jal lijiye' scene from her 2006 'Vivah' and shared a hilarious video.

After tweeple flooded the micro-blogging site with memes featuring the actress, she shared a video re-enacting the scene, but with a rib-tickling twist.

Dressed in a yellow t-shirt and blue skirt , Amrita is seen offering a glass of water in the video. "Jal?" she asks as 'Vivah's background music plays in the backdrop.

Seconds later, Amita is seen throwing a bucket of water.

Rao, who made her Bollywood debut in 2002, is known for films like 'Ishq Vishk', 'Main Hoon Na' and more.

She was last seen in the 2019 political drama 'Thackeray'. 'It can be dangerous': Amrita Rao schooled for not putting son Veer in a baby car seat

On the personal front, Amrita recently welcomed her first child with husband Anmol. Amrita and Anmol tied the knot in 2016.

Amrita had revealed that she is nine-month pregnant, in October 2019, by posting a cute photo posing with Anmol while cradling her baby bump. This is Amrita and Anmol's first child.

"Amrita Rao and RJ Anmol welcomed a baby boy this morning. Both the mother and baby are healthy and doing well.

"The family is ecstatic and both Amrita and RJ Anmol thank everyone for their wishes and blessings," they announced, in November 2020.

They often share their son's adorable moments with their fans on social media. 'This Mother's Day will have a new meaning for me with Veer in my life': Amrita Rao
Advertisement